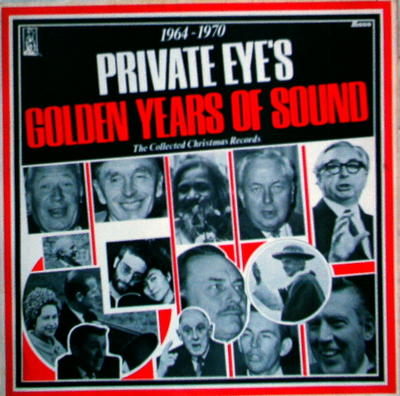 Found this LP of Private Eye'sGolden Years of Sound at a boot sale a couple of years ago. It's a compliation of all the Christmas flexi discs they used to give away with the satirical magazine between 1964 and 1970. It has contributions by John Bird, Eleanor Bron, Barry Fantoni, Wiilliam Rushton and many others. On the two snippets here you can hear Peter Cook and Barry Humphries (doing his Barry Mackensie voice) and Dudley Moore singing a song as Whispering Jim Narg.This Lyn label copy was published by Private Eye in 1973. Most of it sounds pretty dated now , being mainly about the politics and personalities of the time who have long since passed from public conciousness (even in the U.K.).

Since its first publication in 1961, Private Eye has been a prominent critic of public figures deemed incompetent, inefficient or corrupt, and has become a self-styled "thorn in the side" of the British establishment, though it also receives much criticism and ire, both for its style and for its willingness to print defamatory and controversial stories. This was reflected in its once prominent libel lawsuits, for which it became notorious.

As the UK's best-selling current affairs magazine, such is its long-term popularity and significance that many recurring in-jokes in Private Eye have entered popular culture from its pages."

Private Eye - The Rites Of Spring

Private Eye - The Loneliness Of The Long Playing Record Feb. 1969

For those of us of a certain age this brings back all the memories of when we were so daring and how we enjoyed poking fun at the "Establishment".

Happy to oblige Algy - It was nice for me to hear this record again. I have fond memories of That Was The Week That Was and Pete & Dud shows back in the 60's. The humour now is very different.