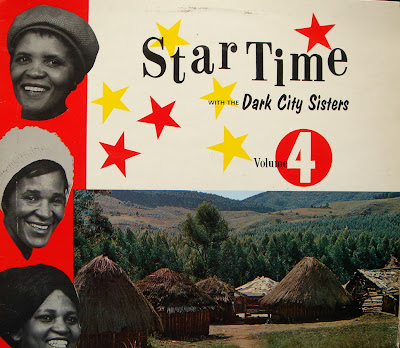 A record I found some years ago in a remaindered record shop in East London.

"The Dark City Sisters were a group of session singers who came together to record an album and in the process popularized an innovative new style of singing. Rather than
singing a common four-part harmony, the Sisters used five parts, which created a richer tone. Sometimes known as "vocal jive," this technique was subsumed under the umbrella term "mbaqanga," meaning, literally, dumpling, and figuratively, a homegrown style. ~ Leon Jackson, All Music Guide"

It puzzles me though that there are only three ladies featured on the front cover of this sleeve? No other information found on the interweb sadly though see they have a couple of compilations available on CD on Sterns and World Curcuit records.


These SendSpace files are available for seven days or until exhausted.
Posted by Wastedpapiers at 10:46 AM 7 comments: 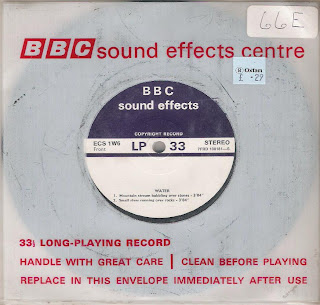 From the sublime to the ridiculous. This double disc 45 that plays at 33 (& a third ) was bought in the Oxfam shop for a few pennies. It's not terribly interesting at first glance but I could not resist buying it for some reason. It has two sorts of water on one disc- a mountain stream and a small river going over stones. The other is two types of static! Ideal for some kind of Fluxus performance or for soundtrack of a film about robots perhaps. I've spared you the static and we just have the water which though rather monotonous is really quite soothing and transports you to a tranquil landscape in the hills somewhere. If you listen carefully you can hear birds chirping in the background.

Discover more about SOUND EFFECTS at the British Library.


These SendSpace files are available for seven days or until exhausted.
Posted by Wastedpapiers at 9:23 AM No comments: 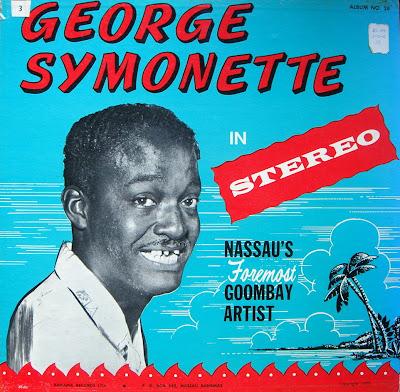 I've had this LP on the Bahama Records label for some years now and just realised I hadn't featured it here which is an oversight. It was released in 1959 and the sleeve notes say-

"George Symonette, who is currently appearing at Blackbeard's Tavern in Nassau, has long been recognised as the Dean of Bahamian Entertainers. His infectious smile, his amiable delivery, his innaye sense of humour combine to make him the most popular of Bahamian musicians.
George accompanies himself on piano and is a most affective solo entertainer. Frequently he is accompanied by the Goombay* drumming of "Peanuts" Taylor....
It is fitting that George Symonette should be the first Bahamian artist to appear in the new medium of stereo, which so ably presents the natural simplicity and inherent charm of his performance.
Four of the selectionsin this album - Stranded, Coconut Fall On De Head De Eye Too BIg For De Belly and Calypso Island were written by Alice Simms of New York."

* When Calypso came to Nassau it gradually underwent an inevitable change. A true Bahamian beat, different in flavour, was introduced, and it was called the Goombay rhythm. Providing the basic beat are the long, deep toned goat skin covered drums, known as Goombat Drums.

Discover more about the music of the Bahamas HERE.


These SendSpace files are available for seven days or until exhausted.
Posted by Wastedpapiers at 5:05 AM 4 comments: 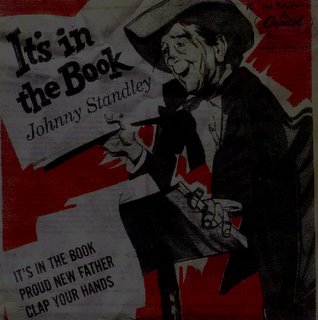 I'm afraid I know very little about Johnny Standley. All I could glean from the internet is that he travelled with his father's "tent shows" in the Mid West and this single, "It's In The Book", was his one "hit" in 1952. The second part of the song is taken from an advert for Granma's Lye Soap. No other recordings seem to be available. I found this EP in the local Oxfam shop for 99p. It's on the Capitol label. Johnny is accompanied by Horace Heidt and His Musical Knights. Johnny reminds me of a few other American comedy acts of the 50's like Jonathan Winters and Milton Berle etc. and his preaching style like that of the english eccentric Gerrard Hoffnung.

These SendSpace files are available for seven days or until exhausted.
Posted by Wastedpapiers at 11:08 AM No comments: 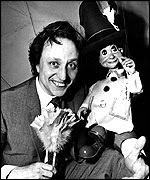 Back due to popular demand by me. This is an EP I found recently and have only just had the chance to rip the tracks using my new ION USB turntable ( from Santa ). Hopefully I can upload more vinyl now after being restricted to CD tracks for a couple of months.

"Ken Dodd was born on the 8 November 1927 in Knotty Ash on the outskirts of Liverpool, son of a coal merchant, Arthur Dodd and wife Sarah Dodd. He went to the Knotty Ash School, and sang in the local church choir of St. Johns Church, Knotty Ash. At the age of seven, he was dared by his school friends to ride his bike with his eyes shut.....and he did, for about 10 feet and the bike hit the kerb. Ken went flying open-mouthed onto the tarmac, resulting in his famous teeth of today.

He then attended Holt High, a Grammar School in Childwall, but left at 14 to work for his father.[1] Around this time he became interested in showbusiness after seeing an advert in a comic entitled; "Fool Your Teachers, Amaze Your Friends - Send 6d in Stamps and Become a Ventriloquist!" and sending off for the book. Not long after, his father bought him a ventriloquist's dummy and Ken called it Charlie Brown. He started entertaining at the local orphanage, then at various other local community functions.

He got his big break at the age of 27. In September 1954 he appeared at the Nottingham Playhouse. A nervous young man, he sat in a local Milk Bar for most of the afternoon going over and over his lines before going to the theatre. Although he can't remember much of the actual act of that night. He did recall, "Well at least they didn't boo me off". But there wasn't much fear of that, as Dodd's act went from strength to strength, eventually topping the bill at Blackpool in 1958."


These SendSpace files are available for seven days or until exhausted.
Posted by Wastedpapiers at 11:09 AM No comments: 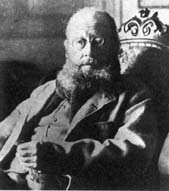 This is an EP I found recently in a charity shop by David Davis who reads three of Edward Lear's "Nonsense Songs". It's on the Delyse label and dated 1964. David davis it seems was a firmiliar voice on children's programmes on the radio during the 50's and 60's but I have no recollection of him myself.

"He id not keep good health. From the age of six until the time of his death he suffered frequent grand mal epileptic seizures, as well as bronchitis, asthma, and in later life, partial blindness. Lear experienced his first epileptic fit while sitting in a tree. Lear felt lifelong guilt and shame for his epileptic condition. His adult diaries indicate that he always sensed the onset of a fit in time to remove himself from public view. How Lear was able to anticipate his fits is not known, but many people with epilepsy report a ringing in their ears or an "aura" before the onset of a fit.

In 1846 Lear published A Book of Nonsense, a volume of limericks which went through three editions and helped popularise the form. In 1865 The History of the Seven Families of the Lake Pipple-Popple was published, and in 1867 his most famous piece of nonsense, The Owl and the Pussycat, which he wrote for the children of his patron Edward Stanley, 13th Earl of Derby. Many other works followed.

Lear's nonsense books were quite popular during his lifetime, but a rumour circulated that "Edward Lear" was merely a pseudonym, and the books' true author was the man to whom Lear had dedicated the works: his patron the Earl of Derby. Adherents of this rumour offered as evidence the facts that both men were named Edward, and that "Lear" is an anagram of "Earl"."


These SendSpace files are available for seven days or until exhausted.
Posted by Wastedpapiers at 8:24 AM No comments: 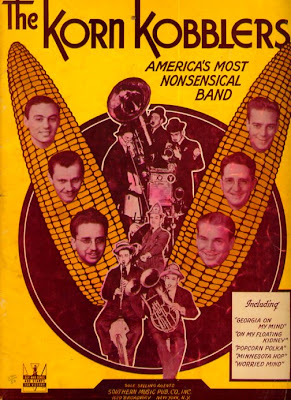 A treat for Xmas from the Korn Kobblers who include one amusing festive novelty song on their "A Real Earful" CD which is probably still available somewhere. Some great song titles include "Don't Shoot The Bartender He's Half Shot Now" and "I'm My Own Granpa".


"The Korn Kobblers, America's most nonsensical band, were discovered by the King Of Korn himself, Guy Lombardo, when they were playing at the Old Vienna in Cincinnati, Ohio, in the summer of 1939. When the Ballantine Inn at the World's Fair in 1940 was opened, Guy spoke to the managers of the spot about the Korn Kobblers. On Guy's recommendation, the six merry madmen were booked into the Inn for two weeks-and remained there until the close of the Fair. From there, they went into the Flagship in Union, New Jersey. After a one-nighter and theatre tour, they returned to the Flagship, where they stayed until they opened at Rogers Corner (now Madison Square Garden) in New York City in October, 1942.

World War II saw Nels replaced by Sam Zakin and Harry replaced by Eddie Grosso. At the time of disbanding in 1954 all the originals, except Harry, were back with the group. Hal Marquess filled in for Howard at times (and was the drummer with Charlie's band after the disbanding of the Korn Kobblers).

1945 and 46 saw the Korn Kobbler's calling Jack Dempsey's Nightclub home. The group moved back to the Flagship (the home of their radio show) during the winter season and toured in the summer.

During the 1948-49 television season the boys were on Kobb's Korner on CBS, Wednesday evenings.

These boys are the most amazing outfit in the musical world! Their jugs, washboards, automobile horns, tonettes, whistles, mouth harps, duck quackers, etc., have made more people laugh than any other band in the country – and that's one thing we can use at all times!"

The Korn Kobblers - Myrtle The Turtle And Flip The Frog

The Korn Kobblers - Since They Stole The Spitoon


These SendSpace files are available for seven days or until exhausted.
Posted by Wastedpapiers at 5:24 AM No comments: 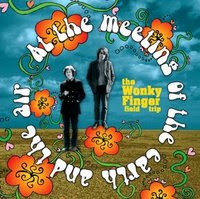 "At The Meeting OF The Earth And The Air" is the rather ponderous title of a stunning new CD by the poet Roger Stevens and some friends who have breathed new life into some old songs Roger and his art school chum Ralph Emmett wrote when they were students in the 60's.

Roger says on the sleeve-

" I met Ralph Emmett on the first day of art college in 1968. He found me a room in a house he was staying. We'd both brought our guitars, both wrote songs and both loved the Beatles. So it was inevitable that we'd both spend the next three years writing songs together. We played them over and over again into a tape recorder. When we left college we lost touch, but I've been carrying that box of tapes around ever since.

Now that I have the technology to convert music from analogue to digital, I copied around thirty of the songs to CD. The next logical step was to take a bunch of songs and re-record them, in a way that we dreamed of recording them nearly forty years ago.

I think the songs stand up pretty well. They're teenagers songs, ofcourse, heavily influenced by the Beatles, The Incredible String Band and countless other sixties bands."

You can purchase the CD and other audio and poetic works at The Rabbit Press.


This SendSpace file is available for svene days or until exhausted.
Posted by Wastedpapiers at 5:48 AM 2 comments: