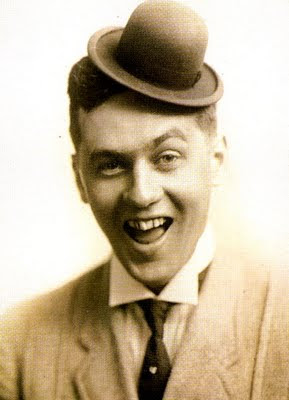 I was reminded of some great laughing songs the other day whilst browsing the Music Makes Me blog and finding some amusing novelty 78's.
I compiled 2 CD's worth a few years back for my own amusement and here are few of the older crackly ones that I have found over the years.
I think the very first laughing song was on a wax cylinder in about 1895 but some of these are from the 20's and 30's. Charles penrose who was responsibel for many including the much played "Laughing Policeman" which used to haunt the Children's Favourites radio show of my youth is included her with one of his lesser known chortling ditties.


Spoofums - You've Got To Laugh

Charles Penrose - Laugh, And You Feel Grand
Posted by Wastedpapiers at 11:54 PM 4 comments: 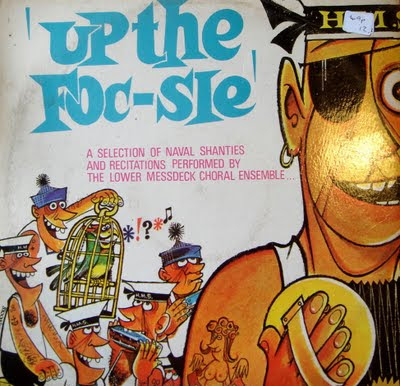 Found ina charity shop in Wrexham yesterday for a few pence. I was attracted by the cheerful cartoon sleeve art initially. The songs are pretty much your average rude rugby song sung by sailors, or drunks pretending to be sailors. Its pretty awful but I thought you might like to hear it so you could avoid it if you ever saw it in a flea market or boot sale. On the cheapo Summit label from 1966.

Lower Mess-Deck Ensemble - Side One
Posted by Wastedpapiers at 11:24 PM 4 comments:


An old LP on the Columbia's "Harmony" label from the 60's I would guess- found at a car boot sale this week for a few pence.

"With his grandfatherly image, Burl Ives parlayed his talent as a folksinger into a wide-ranging career as a radio personality and stage and screen actor. After spending his early 20s traveling the country as an itinerant singer, Ives moved to New York City in 1937. By the end of 1938, he had made his Broadway debut, and he also sang folk songs in Greenwich Village clubs. In 1940, Ives began to appear regularly on radio, including his own show, The Wayfarin' Stranger, on CBS. Ives made his first records for Stinson, a small folk label, then was signed to Decca, a major label. He made his movie debut in Smoky in 1946. In 1948, his first book, Wayfaring Stranger, was published. In 1949, he had his first chart hit with "Lavender Blue (Dilly Dilly)." The same year, he moved to Columbia Records. With the advent of the long-playing record, Ives suddenly had a flurry of LP releases from his three labels: The Wayfaring Stranger on Stinson; three volumes of Ballads & Folk Songs, Women: Folk Songs About the Fair Sex, Folk Songs Dramatic and Humorous, and Christmas Day in the Morning on Decca; and Wayfaring Stranger, Return of the Wayfaring Stranger, More Folk Songs, American Hymns, The Animal Fair and Mother Goose Songs on Columbia. He also recorded a series of albums for Encyclopedia Brittanica Films under the overall title Historical America in Song. In 1951, he hit the Top Ten with "On Top of Old Smoky." In 1952, he returned to Decca. While continuing to publish books and to act on Broadway and in the movies, Ives made a series of albums that included Coronation Concert, The Wild Side of Life, Men, Down to the Sea in Ships, In the Quiet of the Night, Burl Ives Sings for Fun, Songs of Ireland, Old Time Varieties, Captain Burl Ives' Ark, Australian Folk Songs, and Cheers, all released in the second half of the 1950s. In 1961, Ives oriented himself toward country music, resulting in the hit "A Little Bitty Tear," which made the Top Ten in both the pop and country charts. The single was contained on The Versatile Burl Ives. "Funny Way of Laughin'" was another pop and country Top Ten in 1962; it appeared on It's Just My Funny Way of Laughin' and won Ives a Grammy Award for Best Country Western Recording. He turned his attention primarily to movie work from 1963 on, especially with the Walt Disney studio. But he charted with Pearly Shells in 1964 and made a children's album, Chim Chim Cheree and Other Children's Choices, for Disney Buena Vista Records. At the end of the '60s, Ives returned to Columbia Records for The Times They Are A-Changin' and Softly and Tenderly. "
Posted by Wastedpapiers at 11:43 AM No comments: 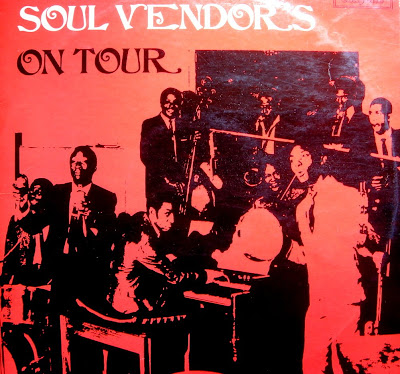 An old LP on the Coxone label from 1967 found at a flea market some time ago. Its a bit scratched so please forgive the blips and pops.

"The Soul Vendors the group that gave us 'Rock Steady', the phrase originated by Coxone Dodd, the record producer and owner of Studio One studio. This new sound was much slower than Ska, stronger base line and a persistent shuffling rhythm together with some very fine sax and trumpet solo's, and the organ was used to greater effect. The vocal styles were very soulful, heavily influenced by the USA soul and R & B records of that period. "Rock Steady" by Alton Ellis issued in 1967 on the Treasure Isle label sums up the new style, using repeat upbeat guitar riff and the brass section answering the vocals, beautiful sax solo, even a vocal backing group, all added up to a suberb production by Duke Reid who went on to make this new sound his own. "


Soul Vendors - Give It To Me

Soul Vendors - Just A Bit O' Soul
Posted by Wastedpapiers at 12:38 AM No comments: 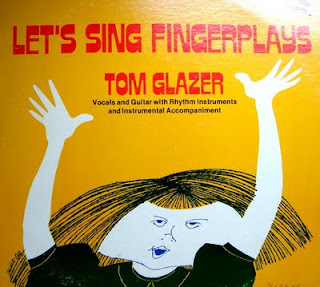 Delving into the archives I found this that I havent uploaded before - probably for good reason! Anyway I feel I have to broaden my outlook to include these dodgy bargains - even at 89 pence it seemed a bit steep! It has a certain charm though and reminds me of the Wally Whyton records of my youth and later - singing along with my young son to similar ditties on the radio and television.

"Best-known for authoring the children's classic "On Top of Spaghetti," folksinger and songwriter Tom Glazer was born in Philadelphia on September 2, 1914. After the death of his carpenter father four years later, he and his siblings were raised by their mother and assorted relatives, sometimes living in an orphanage. At school, Glazer studied a variety of musical traditions and instruments (among them guitar, bass, and tuba) before relocating at 17 to New York City, where he worked at Macy's department store while finishing high school at night. After three years at New York City College, he relocated to Washington, D.C., accepting a job at the Library of Congress and befriending the legendary musicologist Alan Lomax. Upon learning a handful of folk songs from Lomax, Glazer soon began a performing career, even appearing at a small White House function organized by Eleanor Roosevelt before making his formal public debut in early 1943 at Manhattan's Town Hall. Two years later, he launched the ABC radio series "Tom Glazer's Ballad Box," which aired through 1947; he also appeared on radio programs including "We the People," "Listening Post," "True Story," and "Theatre Guild on the Air." Glazer used his radio broadcasts not only to expand his audience, but also to disseminate his political beliefs -- songs like "Because All Men Are Brothers," "When the Country Is Broke," "Talking Inflation Blues" (sometimes covered by the young Bob Dylan), and "Citizen C.I.O." plainly articulated the populist leanings at the heart of much of his music."


Tom Glazer - Come In And Join The Game

Tom Glazer - Go In And Out The Window

Tom Glazer - He's Got The Whole World In His Hands
Posted by Wastedpapiers at 8:00 AM No comments:


From a tape compiled by Jim Benson -

In the event of no records being found and too lazy to remove sscanner and plug in the ION turntable we shall have to put up with some more old novelty songs from various tapes already on Treemo.

Posted by Wastedpapiers at 7:56 AM 3 comments: