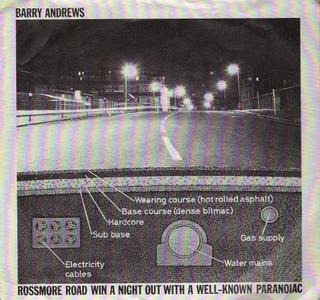 I think I found this Virgin single at Brick Lane back in the 80's. I can't find that much about Barry, only that he was in the punky pop band XTC for a while and left to join Robert Fripp in the League of Gentlemen and eventually Shriekback who may or may not still be around? In between he made this fine single that sadly wasn't a hit and a solo album I forget the name of. Maybe looking HERE will help fill in these gaps in my woeful blurb.

Barry Andrews - Win A Night Out With A Well-Known Paranoiac
Posted by Wastedpapiers at 2:24 PM 9 comments: 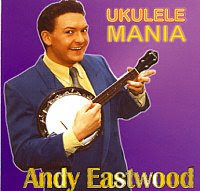 Found this CD " Ukulele Mania" on the ACE label (2004) in a charity shop today for a pound. Always nice to hear old George Formby songs given an airing. We saw Andy on the Ken Dodd "Happiness Show" in Llandudno a couple of years ago and he was very entertaining. I can see why he is much in demand on cruise ships and these touring "wartime" revues like "We'll Meet Again" etc. It has also been signed by Andy and dedicated to someone called Jean. The uke played on the CD is a Gibson UB3 that was once owned by George Formby himself.

"Andy's expertise derives from experience - he entered showbusiness as a child and studied classical violin and piano. But he also developed a passion for jazz and pop and went on to make history at Oxford University by being the first musician ever to give a degree recital on the ukulele! He is now described as one of the world's foremost exponents of the instrument.
Andy traveled the world in cabaret before the legendary Ken Dodd gave him a break into theatre work and he has now performed at many of Britain's most prestigious theatres in a variety of productions, including the hit wartime revue We'll Meet Again, with which he has toured the country five times - giving over 350 performances - portraying one of his showbusiness heroes, George Formby!"


Andy Eastwood - He Played The Ukulele As The Ship Went Down

Andy Eastwood - With My Little Stick Of Blackpool Rock


These SendSpace files are available for seven days or until exhausted.
Posted by Wastedpapiers at 4:25 AM No comments:

Cosmotheka sing a few old favourites from the days of music hall on their 1992 BBC radio show "Cosmotheka's Comedy Songbook" live from the Palace Theatre , Redditch in the West Midlands.

"For those of us that had the pleasure of witnessing the ‘act’ that was Cosmotheka (Dave & Al Sealey) should count ourselves lucky. I say this in the knowledge that I, along with countless others will recall with nostalgia the songs set before us for the first time on CD. So, congratulations to Graham Bradshaw at Folksound for issuing it. I won’t re-trace the history of the duo (Dave does that in the accompanying booklet) but needless to say a majority of the most popular numbers from their extensive repertoire appear here. To name-check a few, we have ‘Wot A Mouth’, ‘Don’t Do It Again, Matilda’, ‘Thuthie’ and ‘Wot I Want Is A Proper Cup Of Coffee’. Dave and Al’s tireless pursuit of the rich music hall heritage that was so much a part of Britain’s social structure is a testament to all song collectors. I reflect with fondness my particular association with the duo when I was asked to play a difficult banjo break on one of their recordings and all the encouragement they gave me in completing the task. Without the likes of Cosmotheka, the world of folk music (which they embraced as much as the music halls) would be a poorer scene. Sadly Al passed away in 1999 leaving a legacy of recordings that if they were to be released today would bring a smile to the sternest of critics. Perhaps now the ball has started rolling someone somewhere will re-issue all of Cosmotheka’s back catalogue."

Buy the CD of some of their best known songs HERE.
Posted by Wastedpapiers at 8:03 AM 2 comments:

Bobbie Comber from a tape on the Poppy label. No date. Historic recordings from 78's.

1. The Return Of Barnacle Bill The Sailor
2. An Elephant Never Forgets
3. Peg-leg Jack
4. With Her Head Tucked Underneath Her Arm Pts 1 & 2

Posted by Wastedpapiers at 10:46 AM 4 comments: