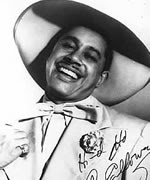 I can't remember if I've mentioned Cab before but here's a few tracks from a cheap CD. I expect you can find compilations still of all his big hits like "Minnie The Moocher" and "Honey Dripper" etc. He also did some great soundtracks for early Betty Boop cartoons with the Fleischer Brothers in which they "rotoscoped" him into the film doing some crazy dance routine where he changes into a walrus!

"Cab Calloway was born Cabell Calloway III in a middle-class family in Rochester, New York, and raised primarily in Baltimore, Maryland. His father, Cabell Calloway II, was a lawyer, and his mother Martha Eulalia Reed was a teacher and church organist. His parents recognized their son's musical talent, and he began private voice lessons in 1922. He continued to study music and voice throughout his formal schooling. Despite his parents' and vocal teachers' disapproval of jazz, Calloway began frequenting and eventually performing in many of Baltimore's jazz clubs, where he was mentored by drummer Chick Webb and pianist Johnny Jones.
After graduating from high school Cab joined his older sister, Blanche, in a touring production of the popular black musical revue Plantation Days (Blanche Calloway herself would become an accomplished bandleader before her brother did, and Cab would often credit his inspiration to enter show business to her). Cab attended Lincoln University, PA , and left in 1930 without graduating.
When the tour ended in Chicago in the fall, Cab decided to remain in Chicago with his sister, who had an established career as a jazz singer in that city. His parents had hopes of their son becoming a lawyer like his father, so Calloway enrolled in Crane College.
His main interest, however, was in singing and entertaining, and he spent most of his nights at the Dreamland Cafe and the Sunset Cafe, performing as a drummer, singer and emcee.
At the Sunset Cafe he met and performed with Louis Armstrong who taught him to sing in the "scat" style."

Cab Calloway - A Chicken Ain't Nothing But A Bird


These SendSpace files are available for seven days or until exhausted.
Posted by Wastedpapiers at 12:39 AM 1 comment:

This isn't from a boot sale or charity shop but a tape someone sent me a few years back and a favourite of mine. Red played saxaphone with the Spike Jones band for many years before going solo (thats him on the left ).

"He was born Ernest Jansen Ingle in Toledo, Ohio on November 7, 1906. Ingle came to music early, being taught the rudiments of the violin at age five by family friend Fritz Kreisler. He stayed with the instrument until he reached the age of 13, at which time he started playing the saxophone, the predominant instrument for the rest of his life. Two years later, Ingle was playing his first professional job as a member of Al Amato's band. By his late teens, Ingle was touring steadily with the Jean Goldkette Orchestra, sharing the bandstand with future jazz legends Bix Beiderbecke and Frankie Trumbauer. After a bandleading stint at Chicago's Merry Gardens Ballroom and a brief tenure under bandleader Maurice Sherman, Ingle and his tenor sax joined up with Ted Weems in 1931. The teaming was good for both men, lasting into the following decade with Ingle contributing comedy vocals to several Weems recordings, including "Jelly Bean," "Tain't So," "Sittin' Up Waitin' for You," and "The Man from the South." The boy singer for the band, Perry Como, would later recall Ingle as 'one of the most talented men I've ever met.'"

Here's Red and Jo Stafford doing a live version of their million selling hit "Tim-Tayshun" on You Tube.


These SendSpace files are available for seven days or until exhausted.
Posted by Wastedpapiers at 4:16 AM 3 comments: 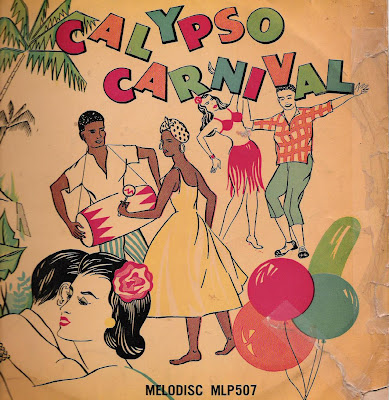 Scouring the archives I thought I had uploaded this one before but I couldn't find it so here it is. It was released in 60's on the Melodisc label inthe U.K. The blurb on the back of the 10" sleeve proclaims -

"In this album you not only have Calypsos in different, colourful and contrasting styles from Trinidad's leading calypsonians in The Lion's "COME PUNKSIE", a contsant favourite to George Browne, The Roving "trooperdor" singing "The Single Man", an old Jewish melody - to the Mighty Terror expressing in "Chinese Children" grave predicament with seriousness and feeling which is undoubtedly felt by many today.
Perhaps it was at this stage Meloldisc Records Ltd. decided to give "Calypso Carnival" a fuller Federal Caribbean flavour and leaving Trinidad to the South they proceeded North to Jamaica for haunting mentos by Tony Johnson and Eric Hayden - the former giving his advice and opinion on the Smarter Sex. Leaving Jamaica they go to Haiti for the Calypso Merangue "Stone Cold Man" by the Charmer. This is the current craze in the Caribbean, Norht and South America. In this you will note strong French influence, but unlike the French in "Sone Cold Man" the blame is on the wife. "

Eric Hayden - Give Her The No.1


These SendSpace files are available for seven days or until exhausted.
Posted by Wastedpapiers at 6:41 AM 9 comments:

Another boot sale find from a couple of weeks ago. This is on the cheapo Marble Arch label from the 60's.


"Joe’s early professional musical career included playing guitar with Johnny Cash, Gene Vincent, Eddie Cochran and appearing with Bill Haley, Jerry Lee Lewis, Little Richard & Chuck Berry, whilst Brian Epstein who promoted some of Joe's shows in the North West of England in the early days gave the opening slot a few times to a young band which he was then interested in working with called The Beatles.
Joe formed his own group Joe Brown & The Bruvvers in 1960 and had numerous top ten chart entries, the best known of which Picture Of You reaching the magical Number One slot and staying months on the chart.
In the early seventies he formed the acclaimed "Browns Home Brew" which included his late wife Vicki and Joe Fagin, their music was a mixture of Country Rock and Gospel. The band toured the college and rock Club circuit and had two albums released by Vertigo records.
Joe has starred in six major motion pictures, among which are numbered What A Crazy World, Three Hats For Lisa, Spike Milligan Meets Joe Brown and Mona Lisa with Bob Hoskins."


Joe Brown - Please Don't Talk About Me When I'm Gone

Joe Brown - You Can't Lie To A Liar


These SendSpace files are available for seven days or until exhausted.
Posted by Wastedpapiers at 11:56 PM 2 comments: 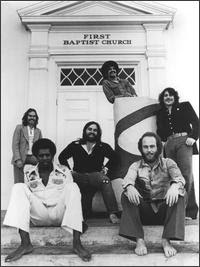 I've had this white label LP since the late 70's which I found in a junk shop in Stepney. I was a Little Feat fan at the time so amazed it turned out to be a concert by them. I assumed it to be taken from a radio show as the audience sounded quite small and intimate. Today I found out where it was from. It was recorded in New York at Ultrasonic Studios ( WLIR) in Septemeber 1974. I know this because the whole thing , and hundreds of other concerts are kept at the Internet Archive.

"The band was formed by songwriter, singer and guitarist Lowell George and keyboard player Bill Payne, whom George had met when George was a member of Frank Zappa's Mothers of Invention. Payne had auditioned for the Mothers, but had not joined. They were backed by former Mothers' bassist Roy Estrada and drummer Richie Hayward from George's previous band, The Factory. The name of the band came from a comment made by Mothers' drummer Jimmy Carl Black about Lowell's literally "little feet." The spelling of "feat" was a nod to The Beatles.
There are three legends about the genesis of Little Feat. One has it that George showed Frank Zappa his song Willin, and that Zappa fired him from The Mothers, because he felt that George was too talented to merely be a member of his band, and told him he ought to go away and form his own band. The second version has Zappa firing him for playing a 15 minute guitar solo - with his amplifier off! The third version says that Zappa fired him because Willin contains drug references ("weed, whites and wine"). Ironically, when Willin was recorded for the first, eponymous Little Feat album, George had hurt his hand and could not play the song's slide part, so Ry Cooder sat in and played the part. This was one reason why Willin' was re-recorded and included on their second album Sailin' Shoes. Sailin' Shoes was also the first Little Feat album to include cover art by Neon Park, who had painted the cover for Zappa's Weasels Ripped My Flesh."


These SendSpace files are available for seven days or until exhausted.
Posted by Wastedpapiers at 1:40 PM 2 comments: