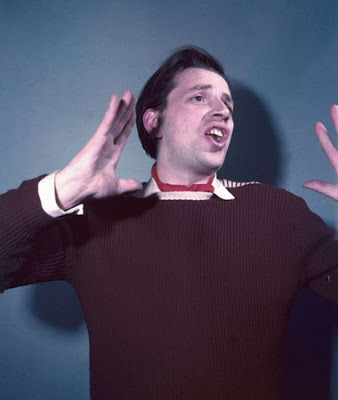 This tape was sent to me some years ago by persons unknown. It's a programme called Saturday Skiffle Club hosted by Brian Matthew and went out on BBC Light Programme , as it was then, on 23rd. November 1957. Others on the programme are Dick Bishop's Sidekicks and The City Ramblers.

"He was born in Liverpool and was educated at Stowe public school, where he discovered his interest in modern art, jazz and blues and started coming to terms with his sexuality. This period of his life is described in Scouse Mouse, a volume of his autobiography.
He joined the Royal Navy at the end of the Second World War because, as he quipped to the recruiting officer, the uniforms were 'so much nicer'. As he related in his autobiography, Rum, Bum and Concertina, he was crestfallen to discover that he would not be sent to a ship and was thus denied the "bell-bottom" uniform he desired. Instead he received desk duty and wore the other Navy uniform, described as "the dreaded fore-and-aft". Later, however, he did see ship duty. He never saw active combat, but was almost court-martialled for distributing anarchist literature."

Bubbling Over Four - This Train/Sporting Life

Bubbling Over Four - I Want A Butter And Egg Man


These SendSpace files are available for seven days or until exhausted.
Posted by Wastedpapiers at 7:34 AM No comments: 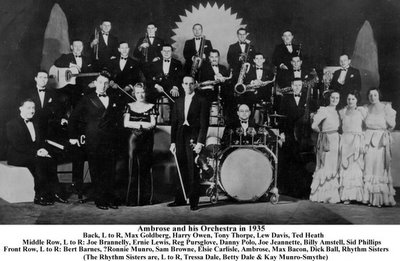 
These SendSpace files are available for seven days or until exhausted.
Posted by Wastedpapiers at 5:36 AM 3 comments:

Golden Voices Of The Music Hall 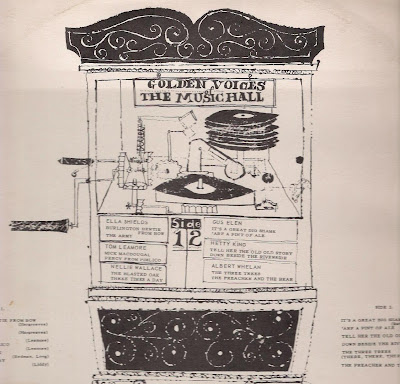 An old early 60's compilation on the budget Ace Of Clubs label of music hall artistes from the 30's and 40's I imagine. Not much information on the sleeve.

Ella Shields.
"Ella Shields (September 27, 1879 – August 05, 1952[1]) was a music hall singer and male-impersonator. Her famous signature song, "Burlington Bertie from Bow", written by her manager and first husband, William Hargreaves, was an immediate hit that is still sung to this day. Though American-born, Ella achieved her greatest success in England."

Nellie Wallace
"Nellie Wallace was one of the most famous and best loved music hall performers and is one of the stars commemorated in the new Theatre of Variety at the Grand Theatre Blackpool. She was a 'grotesque', one of a genre that also included Lily Morris, who famously sang 'Why Am I Always the Bridesmaid?' These women made themselves look bizarre and illustrated their comic songs and patter with outlandishly grotesque dances that actually required great dancing skills. They were as loveable and appealing as they were extraordinary to look at and since the characters they portrayed were usually down on their luck, audiences took them to their hearts."


These SendSpace files are available for seven days or until exhausted.
Posted by Wastedpapiers at 12:18 AM No comments: 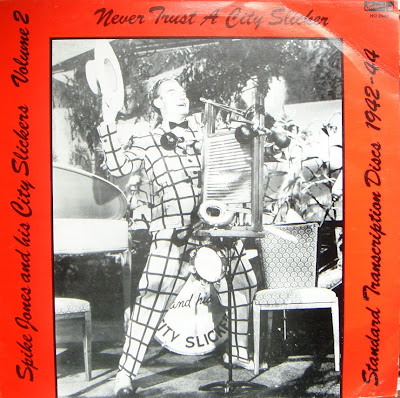 No excuses for uplaoding more Spike Jones and his wonderful band. This 1986 LP on the Harlequin label is a compilation of early stuff from 1942 when Spike had not got as wacky as in later years. It only highlights the exceptional musicianship of his eight peice band and hints at things to come, especially in songs like "I Wann Go Back To West Virginia" and "St-St-St-Stella".


"Lindley Armstrong "Spike" Jones (December 14, 1911 - May 1, 1965) was a popular musician and comedian. He was born in Long Beach, California.
His father was a Southern Pacific railroad agent. He got his nickname by being so thin that he was compared to a railroad spike. At the age of eleven he got his first set of drums. As a teenager he played in bands that he formed himself. A chef in a railroad restaurant taught him how to use adapted pots and pans, forks, knives and spoons as musical instruments. He frequently played in theater pit orchestras. In the 1930's he joined the Victor Young Band and thereby got many offers to appear to radio shows including the Al Jolson Lifebuoy Show, Burns and Allen (with George Burns) and Bing Crosby's Kraft Music Hall. In 1940, he had an uncredited part in the film Give Us Wings, and in 1942 as a hillbilly in Pass the Biscuits, Mirandy. He joined up with vocalist Del Porter and performed in Los Angeles, gaining a cult following. By 1941 the band included violinist Carl Grayson. Other band members were George Rock (voice and trumpet), Doodles Weaver (voice) and Red Ingle (voice). They became his backing band The City Slickers.Jones's wife was the singer Helen Grayco, who performed on some of his radio shows. They recorded five records for Victor's label "Bluebird" before receiving their big break."


Spike Jones - I Know A Story

Spike Jones - The Sailor With The Navy Blue Eyes

Spike Jones - I Wanna Go Back To West Virginia


These SendSpace files are available for seven days or until exhausted.
Posted by Wastedpapiers at 8:42 AM No comments: 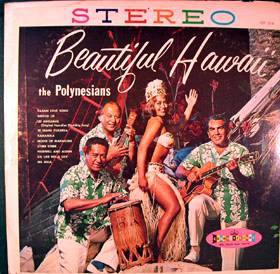 "The term "Polynesia" was first coined by Charles de Brosses in 1756, and originally applied to all the islands of the Pacific. Jules Dumont d'Urville in an 1831 lecture to the Geographical Society of Paris proposed a restriction on its use, and also introduced the terms Micronesia and Melanesia. This division into three distinct Pacific subregions remains in widespread use today.
Geographically, Polynesia may be described as a triangle with its three corners at Hawai'i, New Zealand, and Easter Island. The other main island groups located within the Polynesian triangle are Samoa, Tonga, and the various island chains that form French Polynesia.
However, in essence it is an anthropological term referring to one of the three parts of Oceania (the others being Micronesia and Melanesia) whose pre-colonial population generally belongs to one ethno-cultural family as a result of centuries of maritime migrations. Then westerners came (more maritime migrations) and alternately abused and enslaved and intermingled with the population."


These SendSpace files are available for seven days or until exhausted.
Posted by Wastedpapiers at 7:16 AM No comments: 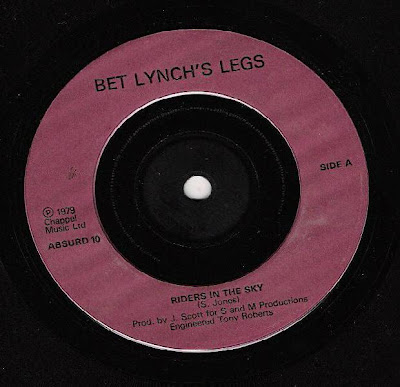 Bet Lynch as we all know was the brassy barmaid at the Rover's Return pub in Britain's longest running soap "Coronation Street". I don't remember her legs very well but obviously these boys did and named their band after her pins. Other than that I know nothing about them. Two quirky instrumentals from old cowboy films which have been done better but it has a certain charm and certainly different from a lot of stuff that came out in 1979.
I must point out the wealth of other versions can be found at a wonderful blog called "The Cheeze Factory" , who's link you can find at the side here.


These SendSpace files are available for seven days or until exhausted
Posted by Wastedpapiers at 12:45 PM 10 comments: 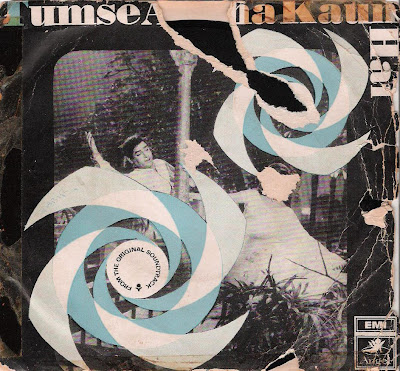 An Indian EP on the Angel label from 1969. Part of a soundtrack to a film called "Tumse Achha Kaun Hai". All the songs here are sung by Rafi but he is joined by Lata Mangeshgar on "Rangat Teri Surat".

"Mohd. Rafi was perhaps the most popular male playback singer ever and maybe the second most popular singer of Indian Cinema after who else Lata Mangeshkar!

Rafi could sing for anyone in any style. At one stage in the 1960s Rafi was the voice of Dilip Kumar, Dev Anand, Shammi Kapoor, Rajendra Kumar, Johnny Walker, Sunil Dutt, Biswajeet, Joy Mukherjee, Dharmendra, Shashi Kapoor and Raaj Kumar! From the classical Madhuban mein Radhika Nachi re to the swinging Aaja Aaja Main hoon Pyar Tera, from the soulful Hum Bekhudi Mein Aapko Pukarein to the comic Sar jo Tera Chakraye, from the philosophical Dekhi Zamaane ki Yaari to the frivolous Aiaiya Karoon Main Kya Sookoo Sookoo, he could sing anything! In fact Rafi was blessed with such a range that he could easily sing in three octaves without veering out of control.

Born in Kotta Sultansingh village in Punjab (now in Pakistan), Rafi moved to Lahore when he was 14. There he studied music under Khan Abdul Waheed Khan, Jeevanlal Matto and Ghulam Ali Khan. He was introduced to radio Lahore by composer Feroz Nizami and made his film debut as playback singer in the Punjabi film Gul Baloch (1944).

He moved to Bombay in 1944 where he was first given a break by Naushad in Pehle Aap (1944). Rafi's earlier singing style appeared influenced by G.M. Durrani and his first really big hit was in Jugnu (1947) where he sang the duet Yahaan Badla Wafaa ka Bewafaee ke Siva Kya Hai with Noor Jehan under Feroz Nizami. But his career really took off with the all-time hit Suhani Raat Dhal Chuki from Dulari(1949). From then there was no looking back and Rafi ruled as the undisputed king of playback singing till the early 70s when Kishore Kumar took over. However it took Rafi much of the 50s to establish his superiority over rest of the competition. Kishore Kumar and to a lesser extent Mukesh and Talat Mehmood were preoccupied by their acting while Hemant Kumar saw a decline in his singing career by the end of the 1950s. Manna Dey never really got the breaks his talent deserved and from 1960-1970 Rafi was unchallenged at the top."


These SendSpace files are available for seven days or until exhausted.
Posted by Wastedpapiers at 10:45 AM 4 comments: