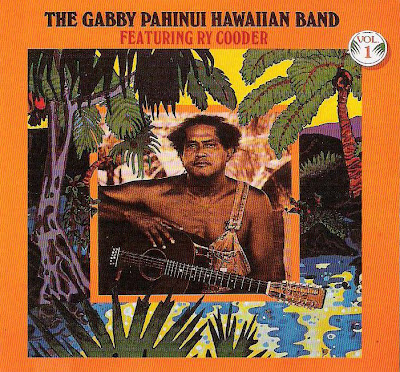 I found this CD at a charity shop today for 99p. I'm a big fan of Ry Cooder and remember him playing some of Gabby's music when he was a guest on Charlie Gillett's radio show around the time this record was made - back in 1974. This is a re-issue from 2000 on the Edsel label. I expect you can still find it somewhere.
On this session he is joined by Ry and his sons Bla and Cyril. Also in attendance are Atta Issacs, Sonny Chillingworth, Manuel "Joe Gang" Kupatu and Randy Lorenzo. Recorded in Hawaii at Gabby's home where generators were bought especially as there was no electricity and the pahoehoe lava walls made excellent acoustics.

"Gabby Pahinui helped to lay the foundation for Hawaiian slack key guitar playing. Although he recorded only one internationally released album, Gabby Pahinui Hawaiian Band, Vol. 1, his influence continues to be reflected in the playing of Hawaiian slack key players and American guitarists including John Fahey, Leo Kottke, and Ry Cooder. During an early-'90s interview, Pahinui's son, James "Bla" Pahinui, also a skilled slack key guitarist, recalled, "My dad got away with a lot of stuff because it worked. He touched so many people because he shared what was in his heart in such an honest and direct way."

Pahinui recorded the first slack key recordings in 1946. He continued to lead his own band, the Sons of Hawai'I, until the early '70s when he formed a new group with his sons Charles, Cyril, and James. Their first steps towards international fame came when Ry Cooder traveled to Hawaii to record Gabby Pahinui Hawaiian Band, Vol. 1, during a two-week-long session at Pahinui's home in Kona in 1974. The home had been the site for nightly jam sessions for many years. The same year, Pahinui made a guest appearance on Cooder's album Chicken Skin Music."


These SendSpace files are available for seven days or until exhausted.
Posted by Wastedpapiers at 7:51 AM 5 comments:

I can't belive I havent featured Leslie Sarony on this blog before now as he is one of the most prolific comedy and novelty song writers of of the 20th century. Just this weekend I had the pleasure of hearing Ken Dodd do a version of "The Old Sow" in Landudno at the North Wales Theatre ( Venue Cyrmru ) and very funny it was too!

"Leslie Sarony (January 22, 1897 - February 12, 1985) was a British entertainer, singer and songwriter. Sarony was born in Surbiton, Surrey and died in London.
He began his stage career aged 14 with the group Park Eton's Boys. In 1913 he appeared in the revue Hello Tango.
In the Great War, Sarony served in the London Scottish regiment in France and Salonika. His stage credits after the war include revues, pantomimes and musicals, including the London productions of Show Boat and Rio Rita.
Sarony became well known in the 1920s and 1930s as a variety artist and radio performer. He made a number of recordings of novelty songs such as "He Played his Ukulele as the Ship Went Down", including several with Jack Hylton and his Orchestra. He teamed up with Leslie Holmes in 1935 under the name The Two Leslies. The partnership lasted until 1946. Their recorded output included such gems as "I'm a Little Prairie Flower".
Sarony continued to perform into his eighties, moving on to television and films."


The SendSpace files are available for seven days or until exhausted.
Posted by Wastedpapiers at 1:12 AM No comments: 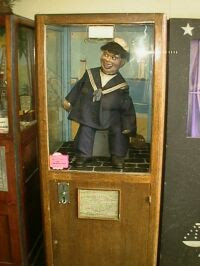 I have managed to compile two volumes of "laughing songs" from various sources - many are from the golden age of shellac like the examples below, courtesy of Angel Radio's excellent archive.
It seems that the first blues ever recorded was a Laughing Song by George W.Johnson in 1895.
The Laughing Policeman is a music hall song by Charles Jolly, the pseudonym of Charles Penrose. In 1922, Penrose made the first recording of this song, (Columbia Records FB 1184). The composition of the song is officially credited to his wife Mabel under the pseudonym "Billie Grey". The Penroses wrote numerous other laughing songs (The Laughing Major, Curate, Steeplechaser, Typist, Lover, etc), but only The Laughing Policeman is remembered today, having sold over a million records. Its popularity continued into the 19960's and 1970s, as it was a frequently-requested song on Children's Favourites and the Radio 1 show Junior Choice.


These SendSpace files are available for seven days or until exhausted.
Posted by Wastedpapiers at 6:54 AM No comments: 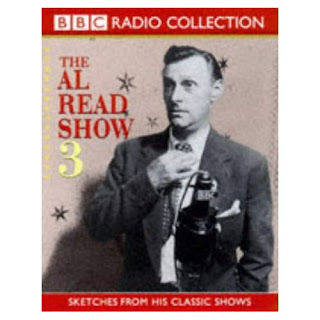 A couple of monologues here from Al Read who I remember from the radio in the 60's and 70's where he used to have a regular show.

"Al Read was born on 3 March 1909 in Salford, (then in Lancashire). His early life was spent in business in the family meat-processing business, which had been started by his father. He rapidly developed a successful comedy career and was a popular after dinner speaker with his unique brand of witty and well-observed humour. Although he made several television series in the 60's, he preferred the medium of radio and his television career never really took off. Read made his radio debut in 1950 and by 1954 he was high on the bill at the Royal Variety Performance at the London Palladium. In 1955 impresario Jack Hylton placed him in the West End revue "Such Is Life" alongside the rising star, Shirley Bassey.
His humorous observation of the lives and idiosyncrasies of ordinary people were based on a decidedly working-class Lancashire experiences and he became known for catchphrases like "Right Monkey!" and "You've met 'em!". Read was a superbly funny cabaret comedian with a keen ear for detail in idiomatic speech. Almost forgotten now, recordings of his monologues are becoming increasingly popular. Monologues such as "Try It The Other Way Round ", "Our Joe Won't Be With Us Much Longer" and "You're Seeing Too Much of the Telly" are now available on reissued BBC audio tapes. Al Read died on 9 September 1987."

Al Read - You're Seeing Too Much Of The Telly

Al read - Our Joe Won't Be With Us Much Longer


These SendSpace files are available for seven days or until exhausted.
Posted by Wastedpapiers at 1:25 AM No comments:

Tommy's singing voice was even worse than his terrible magic tricks but despitethat he made several records and even reached the charts at his height in the 70's when the two examples here were made.

"Tommy Cooper was a true original - the trademark Fez, that distinctive laugh, the clumsy, bewildered delivery, and, of course, the catchphrases make him one of the most instantly recognisable of all comedy icons. He didn't have to say anything to make his audience laugh, his appearance alone was enough.

Like many others, Cooper's first foray into showbusiness was with the forces. After serving as an apprentice shipmaker he joined Horse Guards, from where he became part of the entertainments unit.

It was while entertaining the troops, at a Naafi show in Egypt, that the fez became part of his look. Legend has it that he simply lost the pith helmet he had intended to wear, and grabbed the waiter's hat instead.

The tale of how he adopted his maladroit stage act is equally apocryphal . He supposedly botched an audition as a serious magician so badly that everyone thought it was deliberately hilarious.

If the persona came about by accident, Cooper was meticulous in honing it for every last laugh. A notoriously demanding perfectionist, he would be the bane of those working alongside him.

He was a hard worker, too. On demob in 1947 he joined London's Windmill Theatre - the devilishly hard venue where so many comics learned their craft, performing to uninterested punters between the strip shows. Cooper reputedly performed up to 52 shows a week there.

Tours, TV and a role in Eric Syke's film The Plank followed as, throughout the Sixties and Seventies, he cemented his place in the public's affections. In 1969 he was voted ITV's Personality of the Year.

His appetite for work was so voracious that few were surprised that his death came on stage, doing what he loved. And such was his reputation as a relentless joker that when he collapsed during that televised show, most of the audience thought it was just another of his gags."


Tommy Cooper - The Sheik Of Araby


These SendSpace files are available for seven days or until exhausted.
Posted by Wastedpapiers at 11:24 PM 1 comment: