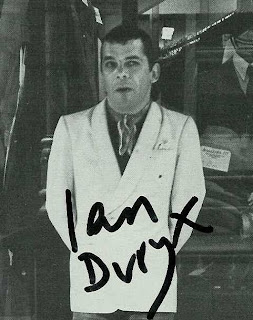 A radio show from 1978 on BBC Radio One. I think it was called "Star Choice" - where pop celebrities of the day played DJ for two hours and raided the BBC Archives. It was Ian Dury's turn and a wonderful eclectic mix it was too -including Max Miller , Roland Kirk, Kay Starr and Albert Ayler to name but a few.
Wikipedia says -
"Dury was born in north-west London at his parents' home at 43 Weald Rise, Harrow Weald, Harrow (although he often pretended, and indeed all but one of his obituaries in the national press stated, that he was born in Upminster, Havering). His father, William George Dury (born 23 September 1905, Southborough, Kent; died 25 February 1968), was a bus driver and former boxer, while his mother Margaret (known as Peggy, born Margaret Cuthbertson Walker, 17 April 1910, Rochdale, Lancashire) was a health visitor, the daughter of a Cornish doctor, and granddaughter of an Irish landowner.
William Dury trained with Rolls-Royce to be a chauffeur, and was then absent for long periods, so Peggy Dury took Ian to stay with her parents in Cornwall. After the Second World War, the family moved to Switzerland, where his father chauffeured for a millionaire and the Western European Union. In 1946 Peggy brought Ian back to England and they stayed with her sister, Mary, a physician in Cranham, a small village bordering Upminster. Although he saw his father on visits, they never lived together again.
At the age of seven, he contracted polio; very likely, he believed, from a swimming pool at Southend on Sea during the 1949 polio epidemic. After six weeks in a full plaster cast in Truro hospital, he was moved to Black Notley Hospital, Braintree, Essex, where he spent a year and a half before going to Chailey Heritage Craft School, East Sussex, in 1951. Chailey was a school and hospital for disabled children, and believed in toughening them up, contributing to the observant and determined person Dury became. Chailey taught trades such as cobbling and printing, but Dury's mother wanted him to be more academic, so his aunt Moll arranged for him to enter the Royal Grammar School, High Wycombe which he attended until the age of 16 when he left to study painting at Walthamstow Art College, having gained GCE 'O' Levels in English Language, English Literature and Art.
From 1964 he studied art at the Royal College of Art under British artist Peter Blake, and in 1967 took part in a group exhibition, Fantasy and Figuration, alongside Pat Douthwaite, Herbert Kitchen and Stass Paraskos at the Institute of Contemporary Arts in London. When asked why he did not pursue a career in art, he said, "I got good enough [at art] to realise I wasn't going to be very good."[citation needed] From 1967 he taught art at various colleges in the south of England.
Dury married his first wife, Elizabeth 'Betty' Rathmell (born 12 August 1942, Leamington Spa, Warwickshire), on 3 June 1967 and they had two children, Jemima (born 4 January 1969, Hounslow, Middlesex) and the recording artist Baxter Dury. Dury divorced Rathmell in 1985, but remained on good terms. He also cohabited with a teenage fan, Denise Roudette, for 6 years after he moved to London."

Ian Dury  -  Star Choice Side Two
Posted by Wastedpapiers at 8:26 AM 5 comments: 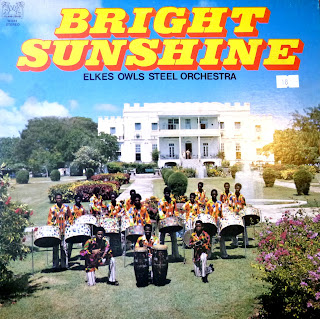 Another steel band from the West Indies on the Wirl label.  Released in 1973.  Attracted by the sleeve more than anything. Steel bands don't really transfer to vinyl very well - it all sounds a bit too tinny if you'll forgive the pun!

Wikipedia says  - " French planters and their slaves emigrated to Trinidad during the French Revolution (1789) from Martinique, including a number of West Africans, and French creoles from Saint Vincent,Grenada, Saint Lucia and Dominica, establishing a local community before Trinidad and Tobago were taken from Spain by the British. Carnival had arrived with the French, and the slaves, who could not take part in Carnival, formed their own, parallel celebration called canboulay.

Stick fighting and African percussion music were banned in 1880, in response to the Canboulay Riots. They were replaced by bamboo sticks beaten together, which were themselves banned in turn. In 1937 they reappeared in Laventille, transformed as an orchestra of frying pans, dustbin lids and oil drums. These steelpans are now a major part of the Trinidadian music scene and are a popular section of the Canboulay music contests. In 1941, the United States Navy arrived on Trinidad, and the panmen, who were associated with lawlessness and violence, helped to popularize steel pan music among soldiers, which began its international popularization.
The first instruments developed in the evolution of steelpan were Tamboo-Bamboos, tunable sticks made of bamboo wood. These were hit onto the ground and with other sticks in order to produce sound. Tamboo-Bamboo bands also included percussion of a (gin) bottle and spoon. By the mid-1930s, bits of metal percussion were being used in the tamboo bamboo bands, the first probably being either the automobile brake hub "iron" or the biscuit drum "boom". The former replaced the gin bottle-and-spoon, and the latter the "bass" bamboo that was pounded on the ground. By the late 1930s their occasional all-steel bands were seen at Carnival and by 1940 it had become the preferred Carnival accompaniment of young underprivileged men. The 55-gallon oil drum was used to make steelpans from around 1947. The Trinidad All Steel Percussion Orchestra (TASPO), formed to attend the Festival of Britain in 1951, was the first steelband whose instruments were all made from oil drums. Members of TASPO included Ellie Mannette and Winston "Spree" Simon. Hugh Borde also led the National Steel Band of Trinidad & Tobago at the Commonwealth Arts Festival in England, as well as the Esso Tripoli Steel Band, who played at the World’s Fair in Montreal, Canada, and later toured withLiberace and were also featured on an album with him."


Elkes Owls Steel Orchestra  -  Side One
Posted by Wastedpapiers at 2:41 AM No comments: 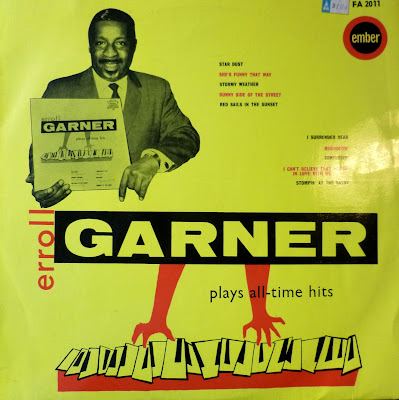 LP on the cheapo Ember label from 1965 found at charity shop today.  Pleasant piano jazz - a compilation of show tunes and standards.

Wikipedia says - " Born in Pittsburgh, Pennsylvania, to an African American family in 1923, Erroll began playing piano at the age of three. He attended George Westinghouse High School, as did fellow pianists Billy Strayhorn and Ahmad Jamal. Garner was self-taught and remained an "ear player" all his life – he never learned to read music. At the age of seven, Garner began appearing on the radio station KDKA in Pittsburgh with a group called the Candy Kids. By the age of 11, he was playing on the Allegheny riverboats. At 14 in 1937, he joined local saxophonist Leroy Brown.

He played locally in the shadow of his older pianist brother Linton Garner and moved to New York in 1944. He briefly worked with the bassistSlam Stewart, and though not a bebop musician per se, in 1947 played with Charlie Parker on the famous "Cool Blues" session. Although his admission to the Pittsburgh music union was initially refused because of his inability to read music, they eventually relented in 1956 and made him an honorary member. Garner is credited with having a superb memory of music. After attending a concert by the Russian classical pianist Emil Gilels, Garner returned to his apartment and was able to play a large portion of the performed music by recall.
Short in stature (5 ft 2 in), Garner performed sitting on multiple telephone directories. He was also known for his occasional vocalizations while playing, which can be heard on many of his recordings. He helped to bridge the gap for jazz musicians between nightclubs and the concert hall.
Garner made many tours both at home and abroad, and produced a large volume of recorded work. He was, reportedly, The Tonight Show host Johnny Carson's favorite jazz musician; Garner appeared on Carson's show many times over the years.
Erroll Garner died from a cardiac arrest on January 2, 1977. He is buried in Pittsburgh's Homewood Cemetery."


Erroll Garner  -  Side One
Posted by Wastedpapiers at 4:02 AM 2 comments: 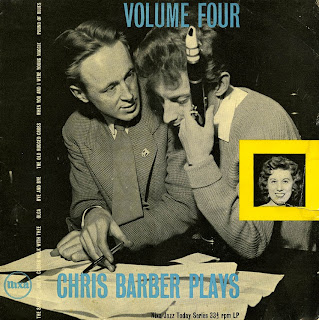 10" LP recorded in the 50's on the Pye Nixa label. Found the other day in a Leek charity shop in The Peak District for 99p.  I have posted previously about Chris Barber but  not this record I don't think.  Mostly trad jazz instrumentals and one vocal by Ottilie Patterson on this side.

Wikipedia says - " Donald Christopher 'Chris' Barber (born 17 April 1930, Welwyn Garden City, Hertfordshire, England) is best known as a jazz trombonist. As well as scoring a UK top twenty trad jazz hit, he helped the careers of many musicians, notably the blues singer Ottilie Patterson, who was at one time his wife, and vocalist/banjoist Lonnie Donegan, whose appearances with Barber triggered the skiffle craze of the mid-1950s and who had his first transatlantic hit, "Rock Island Line", while with Chris Barber's band. His providing an audience for Donegan and, later, Alexis Korner, makes Barber a significant figure in the British rhythm and blues and "beat boom" of the 1960s."

Chris Barber  -  Side Two
Posted by Wastedpapiers at 6:47 AM No comments: 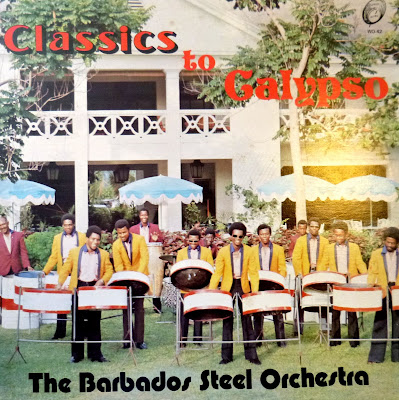 Rather disappointing steel band from Barbados. Was attracted by the sleeve and the 50p price tag.  A weird mixture of calypso, classics and folk songs which all sound very similar after a while.

"Steel band music originated in Trinidad & Tobago in the 1930s and spread to the rest of the Caribbean, becoming one of the sounds most associated with island music in the minds of many visitors to the region. Originally, bamboo tubes of varying sizes had been used as percussion instruments to accompany vocal songs -- mostly because of restrictions on genuine drums, designed by the white government to curtail the annual Carnival celebrations among the Afro-Caribbean and Indian (true Indian, not native American) population. Metal objects, however, produced much louder, livelier accompaniment, and so industrial leftovers -- various types of pans, containers, and drums (in the "barrel" sense of the word) -- became the new instruments of choice. Players learned that different pitches could be drawn from some of the containers, and eventually how to tune the instruments with slight modifications. By the 1940s, steel pan players were crafting instruments that could sound over a dozen pitches. Around 1946-47, steel bands discovered that discarded oil drums -- which were more sturdily constructed -- could be used to fashion excellent instruments, and by the time the '50s rolled around, steel drums made from oil containers boasted different pitches covering full chromatic octaves, plus standard concert-pitch tuning. Technical innovations and refinements continued through the rest of the decade, with ensembles trying to outdo one another at the annual Carnivals. The repertoire of steel bands grew to include not only calypso melodies, but the various styles of music broadcast on the radio -- American jazz, showtunes, and ballroom-dancing music, Latin-American dances, traditional Indian music, and European classical. When college-educated Trinidad & Tobago youth picked up on steel band music in the '50s, it achieved a new respectability among the middle and upper classes, and has remained an important part of the country's -- and the Caribbean's -- musical scene right up to the present day, even if soca has long since eclipsed steel band music in popularity."


Barbados Steel Band  -  Side One
Posted by Wastedpapiers at 5:13 AM No comments: