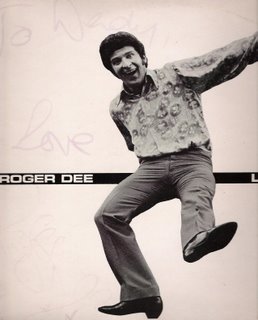 Slim pickings at the bootsale today although I did find this oddity which is on the Toby label from early 70's I imagine judging by some of the impersonations Mr. Dee is attempting pictured on the back of the sleeve - like Tiny Tim, Rolf Harris and Frankie Vaughn. This sounds like a live show in front of an enthusiastic audience at Pontins Holiday camp as they get a name check on the back in the sleeve notes which state-

"Roger was born in Pontins - the son of a lady and gentleman - obviously a marriage of convenience. He merrily tap danced his way up the Ladder of Fame, to become the famous tap dancing window cleaner that he is today!!"

Thanks to many informative comments when I last posted this in 2006 there is more information about Roger which you can find if you type in Roger Dee into the search window above.


Roger Dee - Side One


These SendSpace files are available for seven days or untile exhausted.
Posted by Wastedpapiers at 12:49 PM No comments: An LP on the K-Tel record label from 1978. A compilation of Ronnie's songs, sketches and monologues mainly culled from his TV shows.

"Barker was born in Bedford in Bedfordshire. He had two sisters; Vera (his older sister) and Eileen (his younger sister). The family moved to Oxford when his father, a clerk for Shell Oil, was relocated, when Barker was two years old. He took to writing plays for his family and neighbours, and often sat in the audience of The Oxford Playhouse, his local repertory company, dreaming of fame. Barker attended the City of Oxford High School for Boys, in Oxford, and at sixteen he left and took a job as a bank clerk - but the theatre called. He wrote to the Aylesbury Repertory Company in 1948 and his show business career began. Barker then went on to join the Playhouse Theatre, Oxford, at the time under the actor-management of Frank Shelley, as an actor and stagehand, at £2 10s per week. The two appeared together there, in Ben Travers's A Cuckoo in the Nest and, subsequently, in a number of other venues and roles. In 1993, Barker dedicated his autobiography to Shelley, whom he called one of the "three wise men who directed my career; without men like these, there would be no theatre."


Ronnie Barker - They Tell Me There's A Lot Of It About

Ronnie Barker - Not Round Here

These SendSpace files are available for seven days or until exhausted.
Posted by Wastedpapiers at 6:54 AM 2 comments: 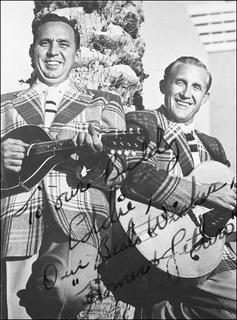 "Besides being a touring comedy team they were noted as seasoned Nashville session musicians. In other words they played on a lot of albums backing up various famous musicians. They were not always credited on the records, and they were paid a set fee for their work. They had their first break as teenagers playing on the Renfro Valley Barn Dance. A locally produced radio show in Tennessee (USA). This lasted until around 1938.

When World War II began the budding stars split up. Homer served in European theater of Operation and as Jethro put it "He was the unsung hero of the Pacific. They wouldn't let me sing!"

After the war the two regrouped and took jobs with Spike Jones. They toured briefly but then got a gig as regulars on the Chicago National Barn Dance as well as regular spots on Don McNeil's Breakfast Club. Both radio programs were based in Chicago. Homer & Jethro were to settle in Chicago and remain even after becoming a national success.They recorded a record or two on the King label circa 1946-48 and then Were Signed by Steve Sholes to RCA in 1948.

Their routine had always been deadpan parodies of popular songs. (sort of a precursor to Weird Al Yankovich) However, they were both first rate musicians and this is why their parodies songs were always popular. They had a number 2 country hit with How Much Is That Hound Dog In The Winder and number 14 with the Parody, Battle of Kookamonga (take off of Horton's Classic Battle of New Orleans)" 
These SendSpace files are available for seven days or until exhausted.
Posted by Wastedpapiers at 7:54 AM 5 comments: