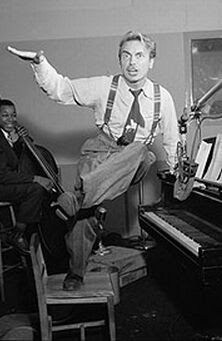 I thought I had featured Harry The Hipster Gibson before here but a quick search through the archives reveals that I haven't. So putting things right with one side of a cassette that Harry shares with Cecil Gant and Benny Carter on the Italian Curcio label which looks like it was part of a magazine called I Giganti Del Jazz from 1981 - but the tracks here were recorded in 1944.

"In the 1940s, Gibson was known for writing unusual songs, which are considered ahead of their time. He was also known for his unique, wild singing style, his energetic and unorthodox piano styles, and for his intricate mixture of a hardcore, gutbucket boogie rhythms with ragtime, stride and jazz piano styles. Gibson took the boogie woogie beat of his predecessors, but he made it frantic; similar to the rock and roll music of the 1950s Examples of his wild style are found in the songs "Riot in Boogie" and "Barrelhouse Boogie". An example of his strange singing style is in the song "The Baby and the Pup." Other songs that Gibson recorded were "Handsome Harry, the Hipster", "I Stay Brown All Year 'Round", "Get Your Juices at the Deuces", and "Stop That Dancin' Up There." Gibson recorded a great deal, but there are very few visual examples of his act. However, in New York in 1944, he filmed three songs for the Soundies film jukeboxes, and he went to Hollywood in 1946 to guest star in the feature-length film musical Junior Prom. Gibson preceded the first white rock and rollers by a decade, but the Soundies he recorded show significant similarities to rock and roll.
"Harry the Hipster" headlining at the Onyx on 52nd Street, May 1948. Note in the photo the Deuces as well as Leon and Eddie's.

While working on "Swing Street" at night, Gibson was a fellow at the Juilliard Graduate School during the day. At the time, Juilliard was strictly a classical music academy, and Gibson excelled there, which partly explains the richness of the music he brought to the jazz world. The other part of the explanation is, his own inventiveness, and Gibson was almost always billed and promoted as a musical genius."

Songs on Side One are-


Harry The Hipster Gibson - Side One
Posted by Wastedpapiers at 6:04 AM 2 comments: 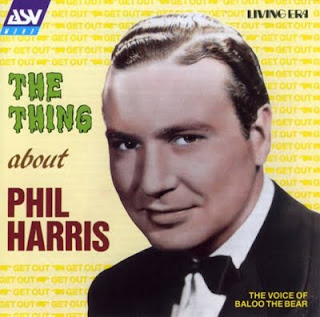 A CD on the Living Era label thats probably still available. A good selection of his well known and not so well known tracks recorded back in the 40's and 50's.

Wikipedia says- "Although he was born in Linton, Indiana, Harris actually grew up in Nashville, Tennessee and identified himself as a Southerner (his hallmark song was "That's What I Like About the South"). His upbringing accounted for both his trace of a Southern accent and, in later years, the self-deprecating Southern jokes of his radio character. Harris began his music career as a drummer in San Francisco, forming an orchestra with Carol Lofner in the latter 1920s and starting a long engagement at the St. Francis Hotel. The partnership ended by 1932, and Harris led and sang with his own band, now based in Los Angeles. From December, 1936 through March, 1937, he recorded 16 sides for Vocalion, most were hot swing tunes that used a very interesting gimmick; they faded up and faded out with a piano solo (probably these were arranged their pianist Skippy Anderson). This was a novel approach and quite unusual for the time.
On September 2, 1927, he was married to actress Marcia Ralston in Sydney, Australia. The couple adopted a son, Phil Harris, Jr. (b. 1935). They were divorced in September, 1940.
Phil Harris played drums in Henry Halstead Big Band Orchestra in the 1920s.
In 1933, he made a short film for RKO called So This Is Harris, which won an Academy Award for best live action short subject. He followed it up with a feature-length film called Melody Cruise. Both films were created by the same team that next produced Flying Down To Rio, which started the successful careers of Fred Astaire and Ginger Rogers."

Phil Harris - My Kind Of Country

Phil Harris - The Thing
Posted by Wastedpapiers at 3:08 AM No comments: 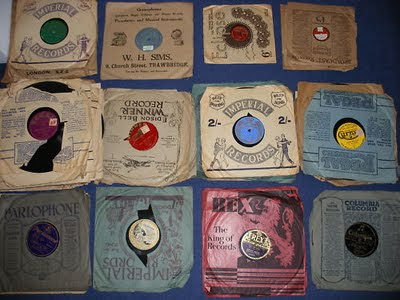 Fred Douglas - Aurora Borealis
Posted by Wastedpapiers at 2:48 AM No comments: 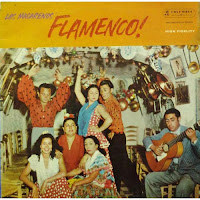 An EP on the Regal label in Spain from 1961. Also from the same box of smoked records at the boot sale on Sunday. Some were a bit too near the fire and were badly burned or warped! This one had the wrong sleeve but will try and find one on the internet. Typical flamenco one would purchase on a package holiday in Spain. 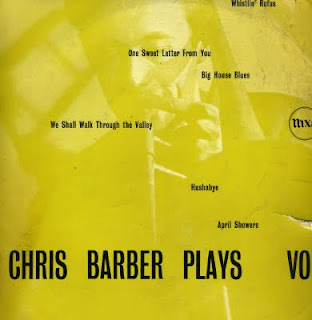 A 10 inch LP on the Pye Nixa label from 1956 I bought at a boot sale this weekend for 50p. Its slightly scratched and the sleeve shows signs of smoke damage and wear.
Line-up is Chris Barber ( trombone ), Pat Halcox ( trumpet ), Monty Sunshine ( clarinet ), Lonnie Donegan ( banjo ), Ron Bowden ( drums ) and Mick Ashman ( bass ).

"Barber played trombone with Ken Colyer in 1949 and began leading his own bands in which he played trombone and double bass in 1950. Barber helped to create the careers of many diverse musicians, most notably the blues singer Ottilie Patterson, who was at one time Mrs Barber. Others include vocalist and banjo player Lonnie Donegan who rose to his own fame during the skiffle music craze of the mid 1950s. He had his first transatlantic hit during his time in Chris Barber's band with the release of "Rock Island Line".

In addition to Donegan, Barber also featured Pat Halcox on trumpet from 1954 onwards, once Ken Colyer had moved on after a difference of opinion as to the way the band should develop. The band formed in 1953 took Colyer's name as they thought that his recent spell in New Orleans would be an attraction, with Monty Sunshine on clarinet, Donegan, Jim Bray (bass), Ron Bowden (drums) and Barber on trombone. In April, 1953, the band made its public debut in Copenhagen where Chris Albertson recorded several sides for the then new Danish Storyville label, including some with a trio from the band, Sunshine, Donegan and Barber (on bass). Later, back in London, Sunshine and Barber recorded a version of Bechet's "Petite Fleur" that made it to #3 in the UK Singles Chart, spending a total of twenty-four weeks therein. It sold over one million copies, and was awarded a gold disc. Although the Barber band featured traditional jazz in the New Orleans style, it later also engaged in ragtime, swing, blues and R&B and worked with other artists including Louis Jordan and Dr. John. After 1959 he toured the United States many times.

In the late 1950s and early 1960s, Barber was mainly responsible for arranging the first UK tours of seminal blues artists such as Big Bill Broonzy, Sonny Terry & Brownie McGhee and Muddy Waters. This, along with encouragement from local enthusiasts such as Alexis Korner and John Mayall, sparked the interest of young local prospective musicians such as Peter Green, Eric Clapton and the members of the The Rolling Stones in the blues, and caused the British blues explosion that in turn resulted in the British invasion exported back to the US in the middle to late 1960s. In January 1963, the British music magazine, NME reported that the biggest trad jazz event to be staged in Britain had taken place at Alexandra Palace. The event included George Melly, Diz Disley, Acker Bilk, Alex Welsh, Kenny Ball, Ken Colyer, Sunshine, Bob Wallis, Bruce Turner, Mick Mulligan and Barber."

1. One Sweet Letter From You
2. Hushabye
3. We Shall Walk Throuhg The Valley

Chris Barber - Side One

Chris Barber - Side Two
Posted by Wastedpapiers at 6:05 AM 3 comments: 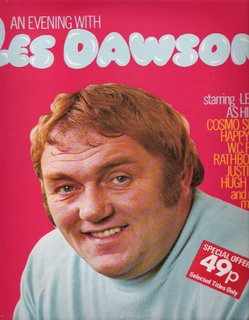 A very funny man and in reality he could play the piano really well. Most of this record is comedy routines but I have extracted two "musical" interludes for your enjoyment, or not as the case may be! A bargain at 49p!

Side Two consists of tracks -

Les Dawson - Bye Bye Blackbird
Posted by Wastedpapiers at 8:32 AM No comments: