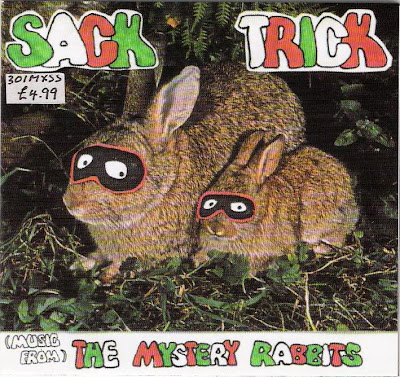 A strange CD I found at Crewe flea market a few years back. It reminds me of Black Sabbath crossed with Monty Python and the Bonzos! I was attracted by the masked bunnies on the cover I must admit. The whole thing has a glorious home-made feel to it and it's on theiur own Sack Trick label. Its still available along with more recent offerings which you can check out at their amusing website.

"Sack Trick began when Chris Dale, Alex Dickson and Alessandro Elena (A.K.A Sponder), the founding members of the band, played with Iron Maiden's Bruce Dickinson on his solo Balls to Picasso tour. After the tour, Alex and Bruce wrote Bruce's next solo album, titled Skunkworks. Chris Dale co-wrote Innerspace, which featured on the album, as well as writing two songs, I'm in a band with an Italian drummer and Americans are Behind. Bruce encouraged Chris to write more, and decided to include Chris's songs as B-sides to Back from the edge, the only single from the Skunkworks album. The tracks were also included on the second disc of the 2005 "Expanded Edition" of the album. After the Skunkworks tour, the band split. Bruce went on to make his Accident of Birth album, while Chris continued writing and formed Sack Trick with Alex and Alessandro.
Sack Trick played their first gig on 12th May 1998, at HQ's in London, England. The lineup was Chris Dale (bass), Jef Streatfield (guitar), Robin Guy (drums), Jem Davis (keyboards). Since then, the lineup has undergone changes for nearly every gig the band has played, bringing in talent from all over the UK, including members of bands such as Rachel Stamp, Skunk Anansie and Rainbow, and even a gig featuring Bruce Dickinson on vocals."


These SendSpace files are available for seven days or until exhausted.
Posted by Wastedpapiers at 6:07 AM No comments: 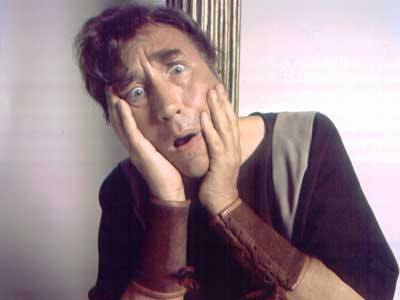 Oooh no missus! Yes, getting desperate for uploads now and plumbing the depths of my CD collection as the ripping fascility is still beyond me at the moment (if anyone has a Sony CD recorder perhaps they could give me some tips on how to make it record from an analog source ). The CD is on the Tring label from 1995 and contains some awful disco tracks with Frankie "Ooohing" and "Oh No Missusing" through them but other tracks are from an earlier period where he duets with Margaret Rutherford ( Nymphs and Shepherds ) and sings a version of Three Little Fishes that was played alot on Childrens Favourites on the radio in the 50's and 60's.

"Howerd was born the son of a soldier in York, England, in 1917 (not 1922 as he later claimed). He was "lightly" educated at Shooters Hill Grammar School (later to become Eaglesfield School) in Eltham, London. His early hopes of becoming a serious actor were dashed when he failed an audition for RADA. He got into entertaining during his wartime stint in the army. Despite suffering from appalling stage fright he continued to work after the war, beginning his professional career in the summer of 1946 in a touring show called For the Fun of It.
He soon started working in radio, making his debut at the start of December 1946 on the BBC Variety Bandbox programme with a number of other ex-servicemen. His fame built steadily throughout the late 1940s and early 1950s (aided by material written by Eric Sykes, Galton and Simpson and Johnny Speight). In 1954, he made his screen debut opposite Petula Clark in The Runaway Bus, which had been written for his specific comic talents, but he never became a major film presence. When he began experimenting with different formats and contexts, including stage farces, Shakespearean comedy roles, and television sitcoms, he began to fall out of fashion. After suffering a nervous breakdown at the start of the 1960s, he began to recover his old popularity, initially with a season at Peter Cook's satirical Establishment Club in Soho. He was boosted further by success on That Was The Week That Was (TW3) in 1963 and on stage with A Funny Thing Happened on the Way to the Forum (1963–65), which led into regular television work. He was awarded an OBE in 1977."


These SendSpace files are available for seven days or until exhausted.
Posted by Wastedpapiers at 12:34 PM 5 comments: 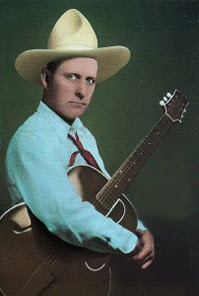 My CD recorder is busted at the moment so can't upload any vinyl just now, so here's a couple of CD tracks from some 78's at the Country & Western Music Archive. I remember him best from his song "The Runaway Train" that was constantly featured on Children's Favourites on the radio during the 50's and 60's.

"Carson Jay Robison (August 4, 1890 - March 24, 1957) was an American country music singer and songwriter. He was also known as Charles Robison.
Born Carson Jay Robison in Oswego, KS. His first professional job was as a singer and whistler at radio station WDAF (Kansas City, MO). In 1924 he moved to New York City and was signed to his first recording contract with Victor Records. From 1928 to 1931 he teamed with Frank Luther and recorded songs. In 1932, he started his own band and continued touring and recording through the 1930s and 1940s. In the late 1940s and early 1950s he appeared on the Grand Ole Opry.
Although he played country music for most of his career, he is also remembered for writing "Barnacle Bill The Sailor" with music composed by Frank Luther.
Carson Robison died in 1957 in Poughkeepsie, NY and was posthumously inducted into Country Music Hall of Fame in 1971."


These SendSpace files are available for seven days or until exhausted.
Posted by Wastedpapiers at 4:49 AM 3 comments: