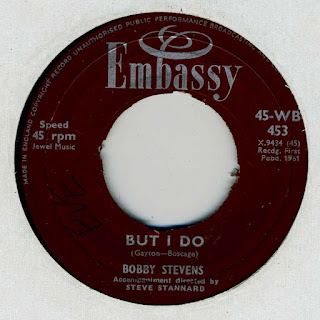 An Embassy 45 from the boot sale this week.  Covers of two New Orleans based artists - Clarence Frogman henry and Alan Toussaint.   The cheapo Embassy label was sold exclusively by Woolworths from the 40's to the 60's covering all the hits of the day.


He recorded mainly for UK's Embassy Records under the Ray Pilgrim name and also made nearly 150 cover records for the Embassy Records label using in addition to Ray Pilgrim the nameBobby Stevens (particularly in earlier 1960-1962 releases). In later releases he used the names The Typhoons, The Starlings, The Jaybirds and the Beatmen.[1] He was the lead vocals in The Typhoons alongside Mike Redway, and the lead vocals in The Starlings alongside Joan Baxter).
His recordings under various names were released on over 30 different labels in over 20 different countries with aggregate sales estimated at around five million. He also recorded TV jingles, demos, and film soundtracks.
Pilgrim did not regard singing as a long-term career and said he only became a professional singer to enable him to give up his job at a bank to go to university and get a degree at the London School of Economics. He sang with the Oscar Rabin Orchestra and was featured for over 190 consecutive weeks singing live on the popular BBC radio programme, Go Man Go. He was also guest on other shows such as the BBC's Saturday Club and ITV's Cool For Cats.
Pilgrim, although concentrating on singing cover versions of many famous songs, he wrote few original songs including "Baby Doll", "Little Miss Make Believe" and "Love Is Blind" which he recorded himself for Oriole. His songs were also interpreted by other artists. "Little Christine" written by Pilgrim was a successful hit for Dick Jordan, Burt Blanca, and Danny Fisher. Pilgrim's "Just Once More Dance" was recorded by Lee Curtis, and his song "Big Boy", which was the English version of the Norwegian Eurovision Song Contest song "Voi Voi", was performed and recorded by Nora Brockstedt.

Posted by Wastedpapiers at 2:08 AM No comments: 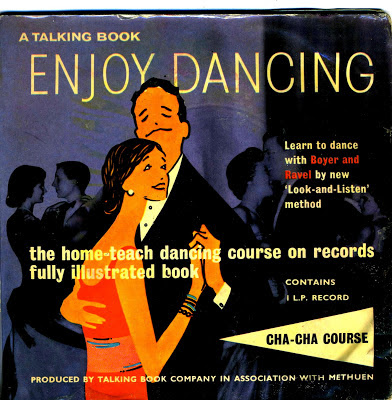 A flexi disc enclosed in a booklet describing how to dance the Cha Cha.  Ronnie Boyer and Jeanne Ravel are your tutors- with a musical  backing. Produced by the Talking Book Co. Ltd in assioation with Methuen,  1960's.

Enjoy Dancing  -  Cha Cha
Posted by Wastedpapiers at 1:56 AM No comments: