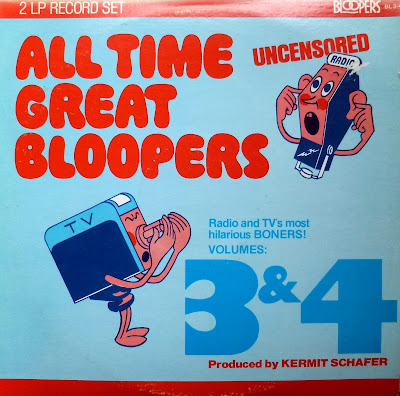 Double LP on the Bloopers label - Kermit Schafer Enterprises from the 60's I would guess.  Some funny and some not so funny but always interesting.
Wikipedia says  -

Bloopers came into prominence in 1931, when radio announcer Harry Von Zell mispronounced the name of then-President of the United StatesHerbert Hoover as "Hoobert Heever" on the air, but Schafer's is believed to be the first attempt at collecting and presenting them. Other similar famous finds of Schafer's include ABC correspondent Joel Daly intoning, "The rumor that the President would veto the bill is reported to have come from a high White Horse souse," and veteran radio host Paul Harvey breaking into uncontrollable laughter at a story about a pet poodle.
These were collected and released in LP audio collections such as Pardon My Blooper! and Your Slip is Showing, which were briefly popular in the 1960s. A movie version also entitledPardon My Blooper was released in 1974. These led the way for such later TV shows as TV's Bloopers & Practical Jokes, hosted by Dick Clark. Schafer himself gained minor celebrity under the nickname The Blooper Man.

Schafer has come under criticism from TV and radio historians who have noted his deceptive presentations in his albums. If Schafer could not obtain an actual audio recording of the event (as many of these bloopers occurred live and were not always transcribed onto recordings), he would simply hire actors and recreate the event—without offering any disclaimer. This led to some misrepresentations. For example, the blooper by Harry Von Zell described above was not recorded, so Schafer recreated it.[1] Had Von Zell's mispronunciation occurred as the President was being introduced to an audience, as presented by Schafer, it would have been highly embarrassing. However, Von Zell's blooper occurred at the end of a brief presentation in honor of the President's birthday, which, while still embarrassing, was not quite as mortifyingly so as President Hoover was not present.
Schafer is historically remembered for an unwitting libel he committed by dramatizing an incident that never happened. In his vinyl record Pardon My Blooper!, Volume 1, Schafer replicated the famous radio show host "Uncle Don" Carney, who broadcast on WOR in New York City to millions of children from 1928 to 1947. In Schafer's brief drama, Uncle Don mistakenly believes his microphone is off, then utters a contemptuous indecency.[2][3]
Schafer's motivation to recreate Uncle Don included widespread popular rumors, some surprisingly misremembered testimony, and a contemporary, though probably false story in Varietyabout one of Uncle Don's many imitators. On April 23, 1930 Variety reported that "about two weeks ago" an unnamed children's bedtime story announcer at an unnamed station inPhiladelphia had blurted out—after the show had concluded and he believed the mic power was off—"'I hope that pleases the little b_______'" (sic). But—Variety claimed—the mic was open, the Federal Radio Commission was listening, bundles of complaining telegrams arrived, and the announcer was fired. Indecent language used in front of women and children carried great opprobrium in 1930, yet this stunning story did not appear in Philadelphia newspapers.
Again, no audio existed, so Schafer recreated this blooper. Schafer's "Uncle Don" segued from a gentle goodbye song to the children, then misopedically declared, "We're off? Good, well, that oughta hold the little bastards!" There is absolutely no factual evidence that Uncle Don ever said this, and Schafer's false recording perpetuates an unflattering urban legend that the real Don Carney spent his life denying.
Another example of a recreated blooper stemming from a second-hand report is that of a Canadian announcer stating "This is the Dominion network of the Canadian Broadcorping Castration," which utilized one of Schafer's voice actors. This alleged error has also passed on into urban legend in Canada, although it has never been confirmed as to whether it ever occurred.
Not all of Schafer's bloopers were recreated; one of his Pardon My Blooper albums, for example, included a rare outtake from a 1939 Bing Crosby recording session for "Wrap Your Troubles In Dreams" in which Crosby good naturedly starts swearing at his producer for changing the arrangement of the song he was singing. By the 1950s and 1960s transcribed recordings had become more commonplace, particularly for news broadcasts, so Schafer was able to include genuine recordings of some broadcasters, particularly the aforementioned Paul Harvey and Lowell Thomas, the latter being featured on several occasions 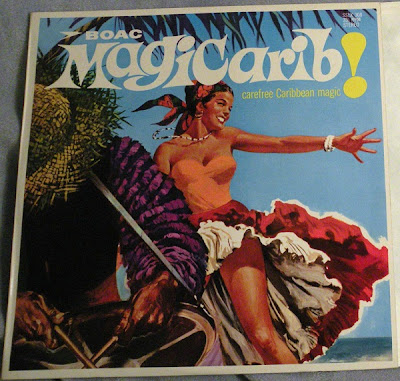 Nice find at charity shop today on the BOAC label from 1968.  Obviously a freebie for tourists to the Caribbean to remind them of their holidays. I particularly like the sultry calypso sounds of  Papette & The Islanders Steel Band.

Calypso is a style of Afro-Caribbean music that originated in Trinidad and Tobago during the early to mid 20th century, and lays it roots in the West African Kaiso and the migration of Martinican planters and their slaves.
The music, which drew upon African and French influences, became the voice of the people, and was characterized by highly rhythmic and harmonic vocals, which was most often sung in a French creole and led by a griot. As calypso developed, the role of the griot (originally a similar traveling musician in West Africa) became known as a chantuelle and eventually, calypsonian. As English replaced patois (creole French) as the dominant language, calypso migrated into English, and in so doing it attracted more attention from the government. It allowed the masses to challenge the doings of the unelected Governor and Legislative Council, and the elected town councils of Port of Spain andSan Fernando. Calypso continued to play an important role in political expression, and also served to document the history of Trinidad and Tobago.
The French brought Carnival to Trinidad, and calypso competitions at Carnival grew in popularity, especially after the abolition of slavery in 1834. While most authorities stress the African roots of calypso, in his 1986 book, Calypso from France to Trinidad: 800 Years of History, that veteran calypsonian, The Roaring Lion (Rafael de Leon) asserted that calypso descends from the music of the medieval Frenchtroubadours.

Magicarib  -  Side One
Posted by Wastedpapiers at 4:27 AM No comments: