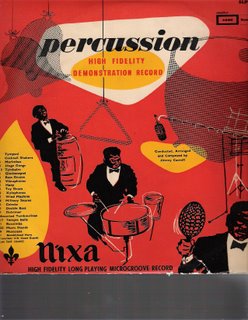 A boot sale find from a couple of years ago. This 10' LP on the Nixa label is from the early 60's I would guess by the artwork. This curios record of five tracks was "Conducted, Arranged and Composed by Jimmy Carroll". The sleeve notes tell us that Carroll", a top man in his profession, noted for his arrangements and versatilty" had been bitten by the "Something different" bug.Carroll was more renowned for his lush string arrangements for people like Rosemary Clooney and Marlene Dietrich. Here he tries something very different to demontstrate the new advances in high fidelity sound and comes up with something akin to the Exotica of Martin Denny and Les Baxter etc. Shame this record is so worn that these delights are rather lost under the pops and crackles! "Only nine musicians take part in this session. They each used several music stands. "operated" several instruments and displayed a light-footed sprinting ability uncommon among professional musicians."


Jimmy Carroll - Side Two
Posted by Wastedpapiers at 8:40 AM 5 comments: 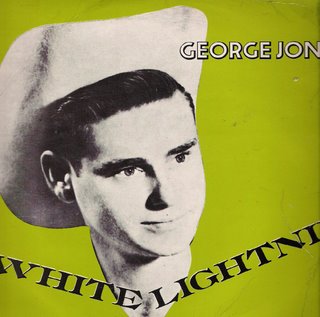 A 10' album on the Ace label of some of George Jones rockabilly recordings before he moved over into the country and western side of things.I must admit I prefer George sounding like this.

"George Glenn Jones (born September 12, 1931), nicknamed The Possum, is an American country singer known for his distinctive voice and phrasing that frequently evoke the raw emotions caused by grief, unhappy love, and emotional hardship. He has had more individual songs than any other singer on the country charts, 167 as of November, 2005, but, according to a formula derived by Joel Whitburn, is second to Eddy Arnold in his overall ranking for hits and their time on the charts. He has also had the most Top 40 Hits, 143, and is second to Arnold with the most Top 10 Hits, 78. Since at least the early 1980s he has frequently been referred to as "the greatest living country singer." Almost as often he is called "the Rolls-Royce of country singers." Frank Sinatra once called him "the second best white male singer." And as the scholar Bill C. Malone writes, "For the two or three minutes consumed by a song, Jones immerses himself so completely in its lyrics, and in the mood it conveys, that the listener can scarely avoid becoming similarly involved."[1]
Jones was born with a broken arm in Saratoga, Texas and grew up in the settlements north of Beaumont around the Big Thicket. By age 24, he had been married twice, served in the Marines, and developed his skills as a country musician and singer. After Elvis Presley's success Jones half-heartedly took a stab at rock and roll in hopes of getting noticed but returned to country almost immediately (In his autobiography Jones claims that when he encountered these rock and roll records years later he would use them as frisbees). "Why Baby Why" was his first top-five hit in 1955."

George Jones - Side One
Posted by Wastedpapiers at 8:35 AM 1 comment: 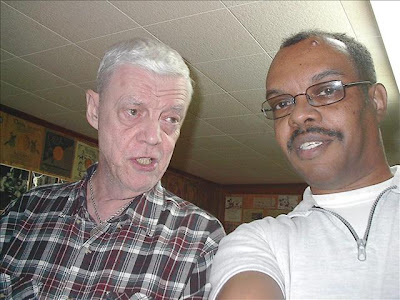 Joe Bussard is on the left in this photo.

A tape from my collection that goes back a few years. Not sure if Joe sent this to me or I obtained it from a third party. Anyway, it's a very entertaining cassette with Joe telling us about his life as a record collector - mostly old 78's he bought from hillbillies and farmers up in the mountains of Kentucky and rural places - mostly fiddle music and old timey stuff he managed to track down. Nice yarns he spins about his meetings with folk and how he came to buy the records.

"Joe Buzzard(sic), another 78 fanatic, has put out his own set called 'Down In The Basement' as well as making his records available to Steven Lance Ledbetter - also an extensive collector – who formed the Dust To Digital label for the purpose of making some of those old recordings available in the best possible sound quality. His crowning achievement is a six-disc box set – literally a cedar wood box, complete with substantial book – of sacred music recorded between 1909 and 1960 called 'Goodbye, Babylon' released in 2003. It takes from both the black and white tradition and it rivals Harry Smith's 'Anthology of American Folk Music' in stature."

Joe Bussard - Side One
Posted by Wastedpapiers at 12:44 PM 2 comments: 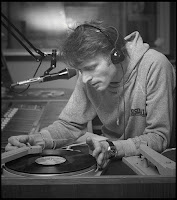 Another cassette of a Charlie Gillett radio show from the 80's featuring Dexy's Midnight Runners front man Kevin Rowland choosing some of his favourite records which include songs by Marvin Gaye, Curtis Mayfield etc.

"Rowland was born in Wolverhampton, England on 17 August 1953 to Irish parents. His first group, Lucy & The Lovers, were influenced by Roxy Music and turned out to be short-lived. His next project, punk rock act The Killjoys, were slightly more successful, releasing the single "Johnny Won't Go To Heaven" in 1977. Alienated by the punk scene, Rowland, together with Killjoys guitarist, Kevin Archer, decided to form a new soul-influenced group, Dexys Midnight Runners. Many of the group's songs were inspired by Rowland's Irish ancestry and were recognisable through Rowland's idiosyncratic vocal style. On forming the band Rowland thought it was "important to have a vocal style", he later recalled, "and I had the idea of putting that 'crying' voice on", partly inspired by General Johnson of Chairmen of the Board.
When Dexys disbanded in 1987, Rowland recorded a solo album, The Wanderer which, together with its three singles, was a commercial failure. His next release was not until 1999 when he recorded a collection of interpretations of classic songs called My Beauty, the album cover of which depicted a heavily made-up Rowland in a dress and women's lingerie.
In 2003, Rowland reformed Dexys Midnight Runners - featuring only one other original member, bassist Pete Williams who fulfilled the role as Rowland's co-vocalist - and embarked on a successful comeback tour backed up with a greatest hits compilation album including two newly recorded songs, "Manhood" and "My Life in England". Both of these new songs were radio tested by the record label, but neither received enough airplay for them to be considered worthwhile releasing.
In December 2006, Rowland launched his own MySpace page where he has promised another Dexys album, and posted some articles to his blog. The song, "It's OK Johanna", is available there. He also appeared as a DJ at the 2007 Big Chill festival."


Charlie Gillett - Kevin Rowland Side One 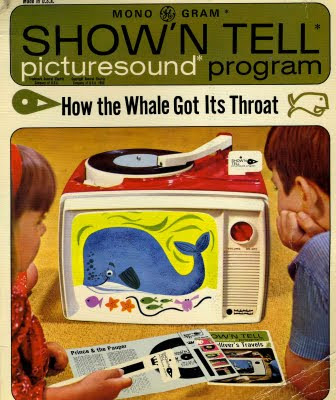 A curious EP on the Mono Gram label via Pickwick International back in the 60's . One assumes you bought the combined record player TV/slide show thingy and then bought the records which include a plastic strip with tiny transparencies embedded into it to play on your machine. One side is the story of How The Whale Got It's Throat - part of the Just-So stories by Rudyard Kipling and the other side is an excerpt from Saint Saens "Carnival Of The Animals".

"The Show 'n Tell was a toy combination record player and filmstrip viewer manufactured by General Electric from the 1950s to the 1970s.
It resembled a television set, but had a record player on the top. Records and slides were sold for it in combination. The slide strip, which was a flat plastic key 8 inches long containing a strip of 16mm color film, was inserted into the top of the device. As the record played (typically telling a story), the slide strip, through which the images were projected on the screen, would automatically advance to illustrate it. The mechanism by which the slide advanced was purely mechanical, and was based on the rotation of the turntable, so proper operation required manually spinning it a few revolutions before beginning the presentation.
It also functioned as a standard record player, able to play 16, 33⅓, 45, and 78 RPM records through its built-in speaker.
The Show 'n Tell was also sold as the Show 'n Tell Phono-Viewer by CBS Toys, in the early 1980s, under the brand name "Child Guidance." These devices, which were drastically redesigned from their earlier version, only had two speeds (33⅓ and 45), and could not play full 12" LPs. However, the Phono-Viewer could optionally move the projected image off the built-in screen and onto an outside surface (such as a wall or screen).
Licensed film strip and record packages were produced for many different children's properties, including Disney and Sesame Street."

Show & Tell - How The Whale Got His Throat
Posted by Wastedpapiers at 12:21 AM No comments: 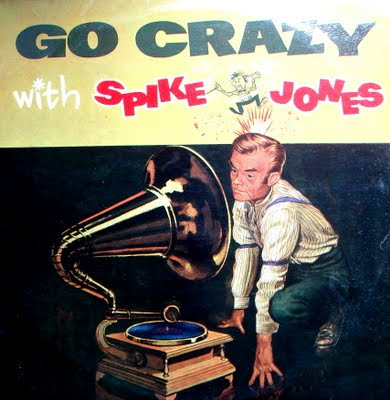 Another Jones now on the World Record Club label from the 60's of tracks recorded in the 40's and 50's. "Spike Jones and the band that plays for fun" is just that - great wacky versions of old classics like I Kiss Your Hand Madame, Hut Sut Song and River Stay Away From My Door to name but a few.

"Jones' father was a Southern Pacific railroad agent. Young Lindley got his nickname by being so thin that he was compared to a railroad spike. At the age of 11 he got his first set of drums. As a teenager he played in bands that he formed himself. A railroad restaurant chef taught him how to use pots and pans, forks, knives and spoons as musical instruments. He frequently played in theater pit orchestras. In the 1930s he joined the Victor Young orchestra and thereby got many offers to appear on radio shows, including Al Jolson's Lifebuoy Program, Burns and Allen, and Bing Crosby's Kraft Music Hall.

From 1937 to 1942, he was the percussionist for the John Scott Trotter Orchestra, which played on Bing Crosby's first recording of White Christmas. Spike Jones was part of a backing band for songwriter Cindy Walker during her early recording career with Decca Records and Standard Transcriptions. Her song "We're Gonna Stomp Them City Slickers Down" provided the inspiration for the name of Jones’ future band, the City Slickers.

The City Slickers evolved out of the Feather Merchants, a band led by vocalist-clarinetist Del Porter, who took a back seat to Jones during the embryonic years of the group. They made experimental records for the Cinematone Corporation and performed publicly in Los Angeles, gaining a small following. The original members included vocalist-violinist Carl Grayson, banjoist Perry Botkin, trombonist King Jackson and pianist Stan Wrightsman.


Spike Jones - Side One
Posted by Wastedpapiers at 11:31 PM 3 comments: 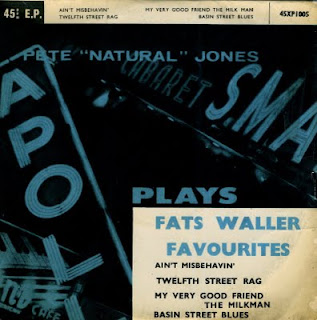 An EP on the cheapo Gala label fromthe 60's I would imagine. Pete "Natural" Jones probably just a session musician hired to do this Fats Waller homage. I could not find anything on the internet about him other than their seems to be an LP featuring the same tunes with a few more - all instrumentals. Please excuse the big crack that goes right through it I discovered after purchase. I really must take my glasses out with me when I go record hunting!