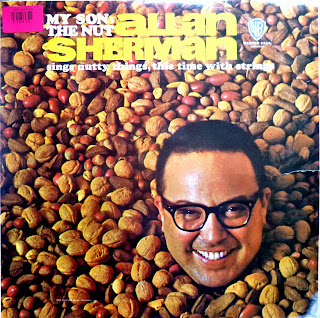 A welcome find was this LP on the Warner Bros. label from 1963.  I already have "My Son The Folk Singer" but not sure how many others in this series there are?   I expect Wikipedia will shed light on the subject.  Hello Muddah.... his big hit is on here but the other parodies of songs on here are just as amusing.  I love the sleeve art too. Another quid well spent!


"In 1951 Sherman recorded a 78-rpm single with veteran singer Sylvia Froos which included the songs "A Satchel and a Seck," parodying "A Bushel and a Peck" from Guys and Dolls, and "Jake's Song." The single sold poorly and when Sherman wrote his autobiography, he did not make reference to it. Later, he found that the song parodies he performed to amuse his friends and family were taking on a life of their own. Sherman lived in the Brentwood section of West Los Angeles next door to Harpo Marx, who invited him to perform his song parodies at parties attended by Marx's show-biz friends. After one party, George Burns phoned an executive at Warner Bros. Records and persuaded him to sign Sherman to a contract. The result was a long playing album of these parodies, My Son, the Folk Singer, which was released in 1962. It sold over one million copies, and was awarded a gold disc. The album was so successful that it was quickly followed byMy Son, the Celebrity, which ended with "Shticks of One and Half a Dozen of the Other," fragments of song parodies including Robert Burns' "Comin' Thro' the Rye": "Do not make a stingysandwich, pile the cold cuts high;/Customers should see salami comin' thru the rye" and "All day, all night Cary Grant," a takeoff on "Marianne."
In 1962, capitalizing on his success, Jubilee Records re-released Sherman's 1951 single on the album More Folk Songs by Allan Sherman and His Friends, which was a compilation of material by various Borscht Belt comedians, such as Sylvia Froos, Fyvush Finkle and Lee Tully, along with the Sherman material.
As suggested by the albums' titles, Sherman's first two LPs were mainly reworkings of old folk songs to infuse them with Jewish humor. His first minor hit was "Sarah Jackman" (pronounced "Jockman"), a takeoff of "Frère Jacques" in which he and a woman (Christine Nelson) exchange family gossip ("Sarah Jackman, Sarah Jackman,/How's by you? How's by you?/How's by you the family?/How's your sister Emily?" etc.) The popularity of "Sarah Jackman" (as well as the album My Son, the Folk Singer) was enhanced after President John F. Kennedy was spotted in a hotel lobby singing the song. By his peak with My Son, the Nut in 1963, however, Sherman had broadened both his subject matter and his choice of parody material and begun to appeal to a larger audience.
Sherman wrote his parody lyrics in collaboration with Lou Busch. A few of the Sherman/Busch songs are completely original creations, featuring original music as well as lyrics, rather than new lyrics applied to an existing melody. The Sherman/Busch originals – notably "Go to Sleep, Paul Revere" and "Peyton Place" – are novelty songs, showing genuine melodic originality as well as deft lyrics."

Alan Sherman  -  Side Two
Posted by Wastedpapiers at 7:51 AM 2 comments: 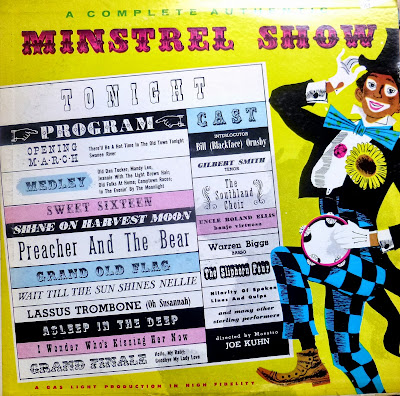 I must admit this LP is pretty awful but I was attracted by the colourful and font rich sleeve.  That's my excuse anyway!   Always had a dislike of minstrels especially after enduring the Black & White variety on the telly in the 60's and early 70's.  This record is a sad reminder of those innocent pre- politically  correct days and what was considered family entertainment.  I only feature it here to remind you how dire it all was!

Minstrel Show  -  Side One
Posted by Wastedpapiers at 1:43 AM 2 comments: 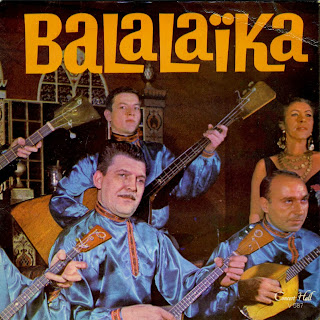 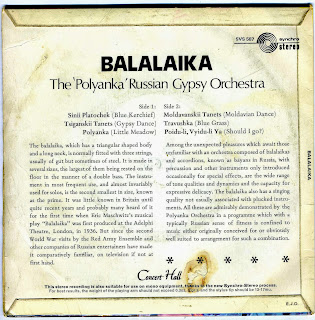 Another EP on the Concert Hall label featuring the massed balalaika's of the "Polyanka" RussianGypsy Orchestra in glorious stereo.  Its actually plays at 33 nd third which was why it sounded incredibly fast when I put it on first at 45 r.p.m.!   Even at 33 and third it sounds like they are going at break neck speed -their little Kossack legs all a blur!

Polyanka Russian Gypsy Orchestra  -  Side One

Polyanka Russian Gypsy Orchestra  -  Side Two
Posted by Wastedpapiers at 6:16 AM 2 comments: 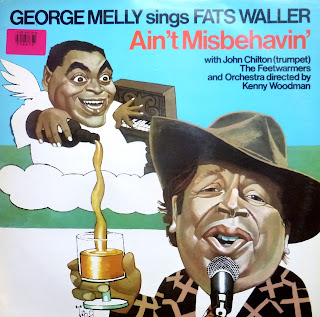 A recent charity shop find for a mere pound.  I have several George Melly records but I have never seen this one before so grabbed it knowing I was in for a treat.

His Guardian obituary says  -  "....Alan George Heywood Melly was born in Liverpool. His father, an easy-going man, came from a large and well-known Liverpool business family, and made a comfortable living in the wool trade, which he hated. Tom didn't mind what anyone did, so long as it made them happy. Maud, George's Jewish mother, had once dreamed of a career on the stage, and remained a leading figure in Liverpool's amateur dramatics. (George's sister Andree was to become a well-known actress.) Maud was the friend of many theatrical queens, and visiting stars such as Robert Helpman, Frederick Ashton and Douglas Byng were often at the house near Aigburth Road, as was David Webster, then running a department store in Liverpool before taking over the Royal Opera House.

George wrote his autobiography backwards, starting with his early years in the jazz world, and working back to his childhood. Scouse Mouse (1984) is an affectionate account of 1930s middle-class Liverpool and its numerous Melly eccentrics. The snake in the Eden of Sefton Park was George's headmaster at Parkfield prep school, the alcoholic WW Twyne. A manic wielder of the house slipper, given to purple rages, Twyne deplored almost everything about the modern world except games. His denunciations of ballet and leftwing politics were so extreme that George knew at once that he would like both. Thus his interest in both anarchism and surrealism, developed at Stowe, can be traced to his comfortable Liverpudlian beginnings, just as his passion for fishing went back to family holidays in North Wales.
George clearly lacked officer-like qualities and was unable to qualify even as a naval clerk when he was called up in 1944. He remained a skiving Ordinary Seaman for most of his three and a half years service, leaving anarchist tracts on the messdeck to annoy his superior officers. He spent most of his leaves in London getting to know the Surrealist circle that gathered round the Belgian poet and gallery-owner ELT Mesens, and relishing an exuberant homosexual life made much easier by his uniform. Rum, Bum and Concertina (1977), his account of this period, is extremely funny. As a convinced surrealist George felt an obligation to be shocking and subversive, but his sense of reality and his sense of humour kept him out of serious trouble....."

George Melly  -   Sings Fats Waller  - Side One
Posted by Wastedpapiers at 12:01 PM No comments: 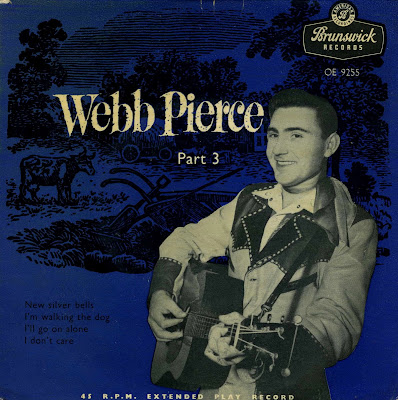 EP on the Brunswick label from the 60's- a compilation of country hits from the mid to late 50's. Webb has a pleasing voice and delivery which put him in the top rank of country singers of his time.


For many, Pierce, with his flamboyant Nudie suits and twin silver dollar-lined convertibles, became the most recognizable face of country music of the era and its excesses.[1] Pierce was a one-time member of the Grand Ole Opry and was posthumously inducted into the Country Music Hall of Fame. A tribute in his honor (produced by singer/songwriter Gail Davies) was released in 2001 entitled Caught In The Webb - A Tribute To Country Legend Webb Pierce."