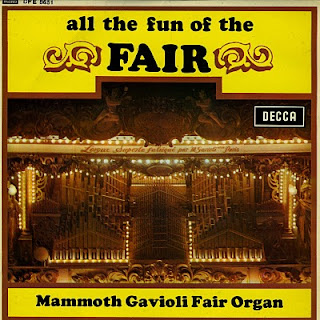 An EP from the Hospice shop yesterday on the Decca label from 1965. We are always amazed by the giant fairground steam organs at the Cheshire Steam Fair every year - the noise they make is incredible. Fascinating to see the holey sheets of music being fed in in huge stacks frond the back- all folded up like concertinas. Several of these monsters churning out old Music Hall hits in one field , togther with the smell of candy floss and smoke can be quite overwhelming!

"The organ that you hear on this record is the largest of eight magnificent 112 key instruments supplied in Britain in 1908-9 by the Paris firm of Gavioli, and is probably the largest fair organ ever built. Delivered to South Wales in 1909, it formed the front of Sidney White's Electric Colisium Bioscope and Variety Show. The advent of the cinema doomed the travelling bioscope shows, and the Colisium Organ was reduced in size to a 98 key instrument and was installed in the Welsh Dragon Scenic Railway, travelling extensively until the ride was permanently erected in the Cosy Comer Amusement Park on Barry Island."


Mammoth Gavioli Organ - Side One

Mammoth Gavioli Organ - Side Two
Posted by Wastedpapiers at 3:54 AM