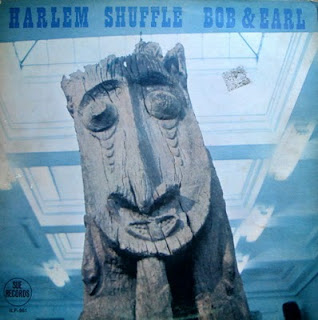 LP on the Sue label from the 60's. Biggest hit was Harlem Shuffle and most of the other songs on here are variations of that idea or else soulful ballads.

"The original duo were Bobby Byrd and Earl Nelson (born Earl Lee Nelson, 8 September 1928, Lake Charles, Louisiana - 12 July 2008, Los Angeles) They had both been members of The Hollywood Flames, a prolific doo-wop group in Los Angeles, California whose major hit was "Buzz Buzz Buzz" in 1958, on which Nelson sang lead.

By 1957, Byrd had started a parallel solo career, writing and recording for contractual reasons as Bobby Day. He wrote and recorded the original version of "Little Bitty Pretty One", and had a hit of his own with "Rockin' Robin" (1958). In 1960, Day/Byrd and Nelson began recording together as Bob & Earl, on the Class record label. However, these releases had relatively little success, and Day/Byrd restarted his solo career.

In 1962, Nelson then recruited a second "Bob", Bobby Relf (January 10, 1937 - November 20, 2007), who also used the stage names of Bobby Garrett and Bobby Valentino. Relf had already led several Los Angeles based acts in his career, including the Laurels, the Upfronts, and Valentino and the Lovers. The latter two groups also featured the then pianist and bass singer, Barry White.

This duo of Relf and Nelson recorded several singles for different labels, before "Harlem Shuffle" in 1963. The song was written by Relf and Nelson, arranged by Barry White, and produced by Fred Smith. It was based on a number called "Slauson Shuffletime" (named after a boulevard in Los Angeles) by another Los Angeles singer, Round Robin. When released on the Marc label, "Harlem Shuffle" became a modest hit on the R&B chart. Its vocal interplay directly influenced later duos such as Sam and Dave. However, its main success came as late as 1969, when it was re-released in the UK and became a Top Ten hit there. Reportedly, George Harrison called it his favourite record of all time.

By that time, Nelson had achieved further success as a solo artist under the alias of Jackie Lee, with "The Duck", a hit dance record released in 1965, which reached #14 in the U.S. (Jackie was Nelson's wife's name and Lee his own middle name). When "Harlem Shuffle" became successful on reissue, Nelson and Relf reunited as Bob & Earl to tour. The duo split up for the last time in the early 1970s."

Bob & Earl - Puppet On A String
Posted by Wastedpapiers at 12:35 PM