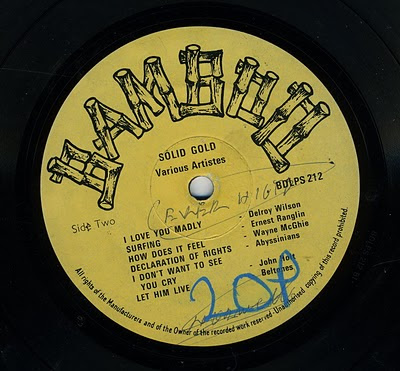 I had rather a soft spot for old reggae, ska etc. back in the 70's and this was picked up then for 20p , probably from Cheshire Street flea market when I lived nearby in Stepney. It has no sleeve and has been used as a frisbee at some point but still sounds good despite the scratches and pops. I particularly love the Abyssinians "Declaration Of Rights" which reminds me of those times and listening to the great Reggae show on Radio London just before Charlie Gillett came on Sunday mornings.

Wikipedia says of the Abyssinians -

"The vocal trio was originally formed in 1968 by Bernard Collins and Donald Manning. Their first song was "Satta Massagana", which was strongly influenced by Carlton Manning's "Happy Land". "Satta Massagana" is a Rastafarian hymn sung partly in the ancient Ethiopian Amharic language. They recruited a third vocalist, who was still at school and often unable to attend rehearsals; He was soon replaced by Donald's brother Lynford Manning, who had previously been a member of their brother Carlton Manning's group Carlton and The Shoes.
"Satta Massagana" was first recorded for producer Clement "Coxsone" Dodd in March 1969, but he decided against releasing it, seeing no commercial potential for what he saw as a song constituting cultural subversion. In 1971, the group purchased the master tapes from Dodd for 90 pounds and released it on their own Clinch label, the single becoming a massive success, prompting Dodd to release his own instrumental and deejay versions. The group released further takes on the song on Clinch by Tommy McCook, Big Youth, and Dillinger, as well as their own "Mabrak", featuring the group reciting passages from the Old Testament. It has since been recorded by dozens of artists. The group's second release, "Declaration of Rights", featured Leroy Sibbles on backing vocals, and like their first was a huge hit in Jamaica, (and subsequently in the international market) and has been covered several times since. Their 1973 single "Y Mas Gan" was similar to "Satta" in its use of Amharic."


Delroy Wilson - I Love You Madly

Wayne McGhie - How Does It Feel

John Holt - I Don't Want To See You Cry

Surfin what a tune - It's worth putting Ernest Ranglins recent album 'Below The Bassline' in your Amazon basket, he updates and revisits some reggae classics on there..

Thanks for dropping by Mondo - much appreciated. Always good to get feedback.