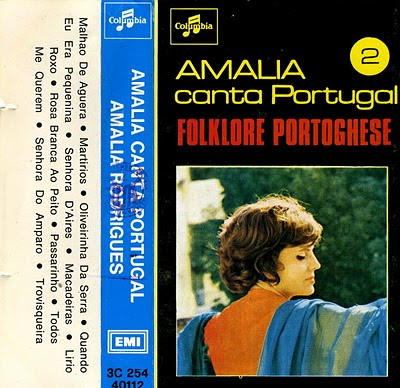 A cassette for a change now- found at the Sally Army shop the other day for ten pence. Sadly this is not really the Fado I was exepcting and more a watered down version MOR for entry into the Eurovision Song Contest or something. Better examples of her work can be found on YouTube where she is singing with a small group of guitar players and not the Mantovani type strings you can hear on this. I upload one side anyway so you can see what I mean. Some of you may even enjoy this but it's the stuff I usually run a mile from!

"Amália da Piedade Rodrigues, GCSE, GCIH, (July 23, 1920 – October 6, 1999), also known as Amália Rodrigues (Portuguese pronunciation: [ɐˈmaliɐ ʁuˈdɾiɡɨʃ]) was a Portuguese singer and actress. Despite official documents which give her date of birth as July 23, Rodrigues always said her birthday was July 1, 1920.[1] She was born in Lisbon, in the rua Martim Vaz (Martim Vaz Street), neighborhood of Pena. Her father was a trumpet player and cobbler from Fundão who returned there when Amália was just over a year old, leaving her to live in Lisbon with her maternal grandmother in a deeply Catholic environment until she was 14, when her parents returned to the capital and she moved back in with them.

"She was known as the "Rainha do Fado" ("Queen of Fado") and was most influential in popularizing the fado worldwide. In fact, she was one of the most important figures in the genre’s development, and enjoyed a 40-year recording and stage career. Rodrigues' performances and choice of repertoire pushed fado’s boundaries and helped redefine it and reconfigure it for her and subsequent generations. In effect, Rodrigues wrote the rulebook on what fado could be and on how a female fadista — or fado singer — should perform it, to the extent that she remains an unsurpassable model and an unending source of repertoire for all those who came afterwards. Rodrigues enjoyed an extensive international career between the 1950s and the 1970s, although in an era where such efforts were not as easily quantified as today. Other well-known international fado artists such as Madredeus, Dulce Pontes and Mariza have come close, however."