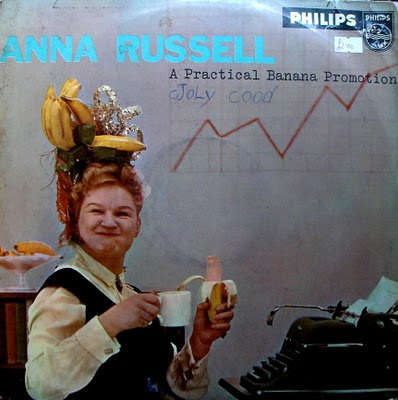 Bumper crop of old scratchy records from a junk shop in Liverpool the other day whilst going round the Biennial. I have already featured Anna Russell here some years ago and she is due for an update. This is a very worn LP on Philips from 1958 when she was obviously at the top of her performing abilities. Hard to describe her comedy really - a quaint kind of female Hoffnung crossed with Joyce Grenfell. Sounds very dated now but still mildly amusing and I've always been a sucker for songs about bananas!

"Russell was born in Maida Vale, London, England, though some sources say her birthplace was London, Ontario. She was educated at St Felix School at Southwold, Suffolk, at Harrogate College and in Brussels and Paris. She studied at the Royal Academy of Music. She had a difficult childhood, and particularly a difficult relationship with her mother, who often shipped her off to live with other relatives for some time. Russell was twice married and divorced, first to John Denison and second to artist Charles Goldhamer. In her "Who's Who" entry she described herself as single.

Russell's early career included a few engagements in opera (including a disastrous appearance as a substitute Santuzza in a British touring production of Cavalleria rusticana, where she clumsily tripped on a set piece and pulled it down – an event later used in her comedy) – as well as appearances as a folk singer on BBC radio in 1931. Russell's mother was Canadian, and the family returned in 1939 to Toronto, after her father's death, where she began to appear on local radio stations as an entertainer. By 1940, she was beginning to find success as a soloist on the concert stage in Canada. Russell's first one-woman show as a parodist was sponsored by the Toronto Imperial Order of the Daughters of the Empire in 1942, though it was the Canadian conductor Sir Ernest MacMillan who really set her on her international career as a "musical cartoonist", when he invited her to take part in his annual burlesque Christmas Box Symphony Concert in 1944. Russell made her New York City debut in her one-woman show in 1948, which she toured throughout North America, Britain, Australia and the rest of the English-speaking world."

Anna Russell - Poetry In The Cellar
Posted by Wastedpapiers at 6:30 AM