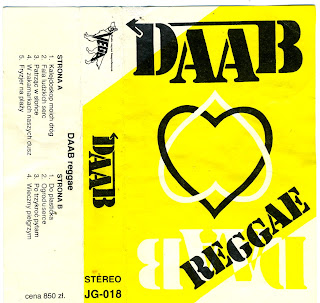 Another cassette from the cupboard which hasnt seen the light of day for a while. I think someone sent me this from Poland back in the 80's when I exchanged many mix tapes and compilations through the mail art network - a forerunner of this blog it could be said.

"Band was founded in 1983 in Warsaw by Dariusz Gierszewski, Andrzej Zeńczewski, Artur Miłoszewski and Piotr Strojnowski. In few months the band took three other artists Waldemar Deska, Andrzej Krzywy and Jarosław Woszczyna. In that time they played songs like Do plastica and Przed nami wielka przestrzeń.

They played in Holland, France, Denmark and USSR. In 1985 they released their new album called DAAB which had a hits like Kalejdoskop moich dróg, Fala ludzkich serc, W zakamarkach naszych dusz, Fryzjer na plaży (instrumental), Ogrodu serce. The latter was the best song in Daab history ever. After this some changes in the band occurred. They added a new member Tomasz Pierzchalski and removed Jarosław Woszczyzna and Piotr Strojnowski.

Andrzej Krzywy left the band soon for a new founded group, De Mono In 1989, because of their friendship, they returned to the band to make a new album, ///. The band restructured into an organisation. The main members were Zeńczewski, Miłoszewski and Gierszewski. They worked with guitar players Michał Grymuza and Grzegorz Rytka, Piotr Korzeniowski, Jacek Wojcieszuk."