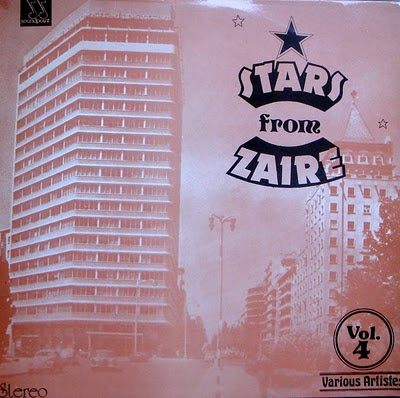 Another old african LP picked up in Brick Lane market many years ago I think. I thought I had uploaded tracks from this already but a quick check didn't find any so here is side two for your listening pleasure.

"Since the colonial era, Kinshasa, Congo's capital, has been one of the great centers of musical innovation, ranking alongside Nairobi, Lagos, Johannesburg and Abidjan in influence. The country, however, was carved out from territories controlled by many different ethnic groups, many of which had little in common with each other. Each maintained (and continue to do so) their own folk music traditions, and there was little in the way of a pan-Congolese musical identity until the 1940s.

Like much of Africa, Congo was dominated during the World War 2 era by rumba, a fusion of Latin and African musical styles that came from the island of Cuba. Congolese musicians appropriated rumba and adapted its characteristics for their own instruments and tastes. Following World War 2, record labels began appearing, including CEFA, Ngoma, Loningisa and Opika, each issuing many 78 rpm records; Radio Congo Belge also began broadcasting during this period. Bill Alexandre, a Belgian working for CEFA, brought electric guitars to the Congo.

Popular early musicians include Feruzi, who is said to have popularized rumba during the 1930s and guitarists like Zachery Elenga, Antoine Wendo Kolosoy and, most influentially, Jean Bosco Mwenda. Alongside rumba, other imported genres like American swing, French cabaret and Ghanaian highlife were also popular.

In 1953, the Congolese music scene began to differentiate itself with the formation of African Jazz (led by Joseph "Grand Kalle" Kabasele), the first full-time orchestra to record and perform, and the debut of fifteen-year-old guitarist Francois Luambo Makiadi (aka Franco). Both would go on to be some of the earliest Congolese music stars. African Jazz, which included Kabasele, sometimes called the father of modern Congolese music, as well as legendary Cameroonian saxophonist and keyboardist Manu Dibango, has become one of the most well-known groups in Africa, largely due to 1960's "Independence Cha-Cha-Cha", which celebrated Congo's independence and became an anthem for Africans across the continent.

Big bands (1930s–1970s)
Into the 1950s, Kinshasa and Brazzaville became culturally linked, and many musicians moved back and forth between them, most importantly including Nino Malapet and the founder of OK Jazz, Jean Serge Essous. Recording technology had evolved to allow for longer playing times, and the musicians focused on the seben, an instrumental percussion break with a swift tempo that was common in rumba. Both OK Jazz and African Jazz continued performing throughout the decade until African Jazz broke up in the mid-1960s. Tabu Ley Rochereau and Dr. Nico then formed African Fiesta, which incorporated new innovations from throughout Africa as well as American and British soul, rock and country. African Fiesta, however, lasted only two years before disintegrating, and Tabu Ley formed Orchestre Afrisa International instead, but this new group was not able to rival OK Jazz in influence for very long.

Many of the most influential musicians of Congo's history emerged from one or more of these big bands, including Sam Mangwana, Ndombe Opetum, Vicky Longomba, Dizzy Madjeku and Kiamanguana Verckys. Mangwana was the most popular of these solo performers, keeping a loyal fanbase even while switching from Vox Africa and Festival des Marquisards to Afrisa, followed by OK Jazz and a return to Afrisa before setting up a West African group called the African All Stars. Mose Fan Fan of OK Jazz also proved influential, bringing Congolese rumba to East Africa, especially Kenya, after moving there in 1974 with Somo Somo. Rumba also spread through the rest of Africa, with Brazzaville's Pamela M'ounka and Tchico Thicaya moving to Abidjan and Ryco Jazz taking the Congolese sound to the French Antilles. In Congo, students at Gombe High School became entranced with American rock and funk, especially after James Brown visited the country in 1969. Los Nickelos and Thu Zahina emerged from Gombe High, with the former moving to Brussels and the latter, though existing only briefly, becoming legendary for their energetic stage shows that included frenetic, funky drums during the seben and an often psychedelic sound. This period in the late 60s is the soukous era, though the term soukous now has a much broader meaning, and refers to all of the subsequent developments in Congolese music as well."