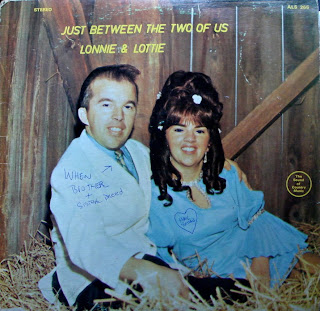 Another scratchy record from the junk shop in Liverpool on the Paragon label in Canada - signed by both Lonnie and Lottie on the reverse, From the 60's I would guess. Versions of old standard country songs like Stand By Your Man and The Games People Play etc. I suppose I was rather attracted by the odd sleeve photo - shame it had been scrawled on by some idiot.

"Lonnie and Lottie were a brother and sister act that were popular with the fans in the southwestern Ontario, Canada area in the 1960s. While many fans might associate a band name of Po' Folks with another country legend, that was the name of the band that backed this popular duo.

Both of them were born in the city of Maniwaki, Quebec, located due north of Ottawa.

The two of them began singing together at an early age. Audiences were listening to their singing talents on stage, radio and television when they were both teenagers.

An album of theirs entitled "Just Between The Two of Us" gives the listener a taste of their harmonies. They also did solo numbers of popular tunes of the day. Backing Lonnie and Lottie on that album were Larry Dyer on lead guitar, Bob Wingrove on steel guitar, John Scott on bass, Gary Nugent on drums, M. DeBenidictis on the piano and organ.

Lonnie and Lottie made appearances on the well-known country music shows that were airing in Canada in that era. They appeared on the famous CHML Main Street Jamboree show that broadcast out of Hamilton, Ontario. Another famous show they appeared on was the CKNX Barn Dance, billed as the largest traveling barn dance show that originated out of Wingham, Ontario.

Other shows included the Gary Buck show that broadcast over CKCO-TV in Kitchener; the Red Barn Jamboree over CKLB in Oshawa.

During their career, they also had their own radio show on CHIQ in Hamilton. "

Lonnie & Lottie - Just Between The Two Of Us

Lonnie & Lottie - So Afraid Of Losing You
Posted by Wastedpapiers at 1:35 AM

I'm looking for the lyric's to the lonnie and lottie song (have faith in me forgiveness is thine) it's on the record COUNTRY SATURDAY NITE WITH LONNIE& LOTTIE AND THE HAPPY VALLY GANG. PLEASE GET BACK TO ME AT lynnettehiggins28@hotmail.com.

Sorry Lynnette I dont know the song you refer to- this is the only Lonnie & Lottie record I have.

Hi Lynette,
I am Lonnie's wife and I will have him send you the lyrics if you still want them.