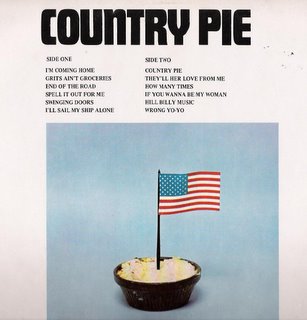 My record collecting chum and devout Chas & Dave fan Jim Benson told me about this record a few years back. He says it's an early session by Chas & Dave during a spell of financial insecurity when they desperately needed the money.Chas Hodges plays guitar as well as piano on this session and Mick Burt is on Drums.Coincidentally I found a copy at a bootsale a couple of months later! Its on the cheap and cheerful Avenue label and released in 1971.

"Pianist Chas Hodges and guitarist Dave Peacock were widely experienced around the British rock scene of the 1960s and early 70s before teaming up with drummer Mick Burt (another much-travelled musician who had gone back to his original trade as a plumber) to form the group. Chas had worked with the legendary producer Joe Meek, backed Jerry Lee Lewis, played with Mike Berry and the Outlaws, along with Ritchie Blackmore, and also the highly respected Cliff Bennett and the Rebel Rousers, which had Burt on drums. He then joined Albert Lee’s cult band Heads Hands and Feet before playing with Dave and Albert in Black Claw. Dave had been equally active, Starting out in The Rolling Stones (no, not them!) in 1960. Spells with The Tumbleweeds, Mick Greenwood, Jerry Donaghue, and the above mentioned Black Claw followed prior to the pair coming together to go out on their own as Chas & Dave."

Country Pie - They'll Never Take Your Love Away From Me

Country Pie - How Many Times

Country Pie - If You Wanna Be My Woman

Country Pie - Wrong Yo-Yo
Posted by Wastedpapiers at 9:04 AM

Love your site! However I find that the volume level on your files is much lower than others I download......can we hoist the volume up a little? Thanks for your efforts!

Thanks for the feedback Richard. I will try and up the volume in future.

I have heard zillions of Dylan cover tunes in my day, but aint never before heard this version of "Country Pie" THANX............

hi
i just stumbled unto your blog _ i have been looking for the country pie album for quite a time , not being aware it has been posted on your site for 3 year now
that's a great discovery but unfortunately the links are dead _ i'd be very glad if you could reupload the album or the tracks
regards

Yes, I would like to oblige but my record collection runs into hundreds and not in any particular order so might take me a while to find certain LP's. I will have a quick look but can't promise anything.

hi
i'm the guy who posted the last comment
thank you for your answer
yes , i know pretty much how hard it is to find a particular lp in a stack of vinyls
i don't want to cause no disturbance
it would be great if you could locate it but if you can't , no problem at all
thank you very much for looking
cheers

If I find my copy I'll put it up on ebay as it seems quite rare. It may take me a while though.