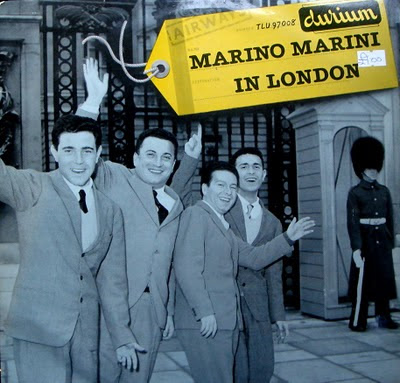 More rather battered vinyl from Liverpool - this time an LP on the Durium label from the late 50's I would guess. A fun group of Italians who are kind of cross between Mike & Bernie Winters and the Spike Jones band.

He was born into a family of musicians on 11th May 1924 in Seggiano in the Grosetto region of Italy. After briefly studying electronics, he studied piano, violin and composition at the Conservatorio Rossini at Bologna, teaching music on his graduation. In 1947, after military service, he was appointed artistic director of the Metropolitan music hall in Naples, where he developed a liking for Neapolitan music. In 1948 he visited the United States for six months, meeting Dizzy Gillespie, Stan Kenton and Charlie Ventura. American jazz was also a formative influence.

On his return, Marini wrote music for films and revues and played in cabaret in Rome and Naples.

In 1955, he placed a newspaper advert seeking “young musicians without experience, singing in tune. If not cheerful, don't apply." From the many applicants he chose Tony “Toto” Savio (guitar), Sergio (drums) and Ruggiero Cori (bass and vocal) for a quartet, Marini playing piano and occasionally singing solo. This quartet played together from 1955 to 1960, a period regarded[1] as the Marino Marini Quartet’s most prolific and successful.

They made their first recording on the Durium label in 1955. The following year they appeared on Italian TV. Their recordings of Marini’s compositions Guaglione, Don Ciccio o' piscatore, Rico Vacilon, La Pansè, and Maruzzella were very popular, Guaglione becoming the first European single to sell more than five million copies. (It was used on the soundtrack of the 1999 film The Talented Mr. Ripley.) Following this successful debut, Marini commenced touring with his quartet, in the following years performing in hundreds of concerts in western and eastern Europe, the USA, the Middle East and Japan.

Marini's recordings in the late 1950s and early 1960s included covers of Domenico Modugno’s Volare, Come Prima and Ciao ciao Bambina and Rocco Granata’s Marina. In 1960, he won the first and the second prizes in the Naples song festival with Serenata a Margellina and Uè uè uè che femmena. In 1958 he performed Mikis Theodorakis's The Honeymoon Song in Michael Powell's film Honeymoon."

Marino Marini - Whatever Will Be Will Be

Marino Marini - Only You