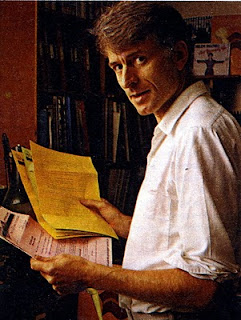 Continuing the homage to Charlie Gillett who sadly passed away earlier this year - here are two old The Alchemists shows from Capital Radio from the early 80's. The first features Mike Howlett the musician and producer who plays some records he likes and some he had produced by the likes of The Police, OMD and Flock Of Seagulls.
The other show is on the theme of Police & Thieves and features records by Bob Marley, Ian Dury, Roy Brown and Charles Penrose.

"Mike Howlett (born 27 April 1950) is a Fijian-born musician, Grammy Award winning producer and teacher based in the United Kingdom and Australia.
In the late 1960s Howlett was the bassist in Sydney pop band The Affair which travelled to England after winning a music competition. He then settled in London and in 1973 joined renowned British progressive rock group Gong, which had been founded by another Australian expatriate, Daevid Allen. Howlett remained with Gong until 1977, recording several albums with them and co-writing much of their material later in this period with drummer Pierre Moerlen.
After leaving Gong, Howlett formed the short-lived band Strontium 90 in 1977, bringing together Sting, Stewart Copeland, and Andy Summers for the first time; the latter trio would later achieve massive success as The Police. Howlett originally intended Strontium 90 to consist of himself, Sting, Summers and drummer Chris Cutler, but Cutler was unavailable and so Copeland was recruited, brought in by Sting, with whom he had already been playing in an early incarnation of The Police. Howlett taped several demos of the band, including the very first version of Sting's "Every Little Thing She Does Is Magic" which was the first recording of the song ever made. He also taped a Paris Gong reunion concert in May 1977, which marked the first time that the future Police played together live. An archival collection of Strontium 90 material was released as the album Strontium 90: Police Academy in 1997."

Charlie Gillett - Police & Thieves
Posted by Wastedpapiers at 8:52 AM