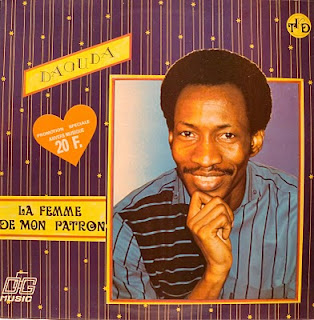 A cassette that looks very dodgy with a thin paper sleeve and very little information on it - originally from Cheshire Street market in the 80's I think.Seems to have come out originally on the TCD label in 1985.
Including tracks Cherie Coco, La Femme De Mon Patron,Je men Fouts, Soungourou Ba, and Kanan Djanfa.

Very little can be found out about him on the internet. All I know he is from the Ivory Coast and had a big hit with "Mon Coeur Balance" in the 80's which Charlie Gillett played quite often. Probably recorded in Paris like so man Soukous records at that time.

Daouda - Side One
Posted by Wastedpapiers at 10:53 AM