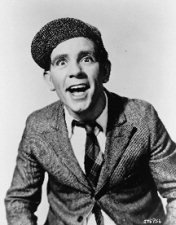 Sorry to hear of the death of Norman Wisdom today who's films I much enjoyed as a nipper back in the 50's.

"Norman Wisdom was born in the London district of Marylebone to Frederick and Maude Wisdom. His father was a chauffeur and his mother a dressmaker. After a difficult and poverty-stricken childhood he joined the 10th Hussars and began to develop his talents as a musician and stage entertainer

After he left the army he went into show-business, gradually becoming one of Britain's most successful stars. In 1954 he released the best-selling single that is still closely associated with his name, "Don't Laugh At Me (Cause I'm A Fool)".
Moving into film in the 1960s, he created an accident-prone, clownish character called Norman Pitkin, a lovable fool who appeared in several successful films, most notably The Early Bird (1965). His famous and widely imitated cry as Pitkin was "Mr Grimsdale! Mr Grimsdale!

In 1967, he was widely praised for his performance as a serious actor in The Night They Raided Minsky's, but his career began to decline in the 1970s and he was out of favour with British tastes in comedy for many years. On 11 February 1987 Norman Wisdom was the subject of Thames Television's This Is Your Life.
He became widely popular again in the 1990s, helped by the young comedian Lee Evans, whose act was heavily influenced by Wisdom's work. The highpoint of this new popularity was the knighthood he received in 1999 from Queen Elizabeth II.
After he was knighted, true to his accident-prone persona, he couldn't resist pretending to trip on his way out off the platform."

Norman Wisdom & Joyce Grenfell - Narcissus
Posted by Wastedpapiers at 10:51 AM

What a wonderful man he was, funny as well as an underated serious actor. In the late 50's and early 60's he used to visit us at the Flockhart and Langrishe garage in Ascot where my father rebuilt Norman's SS 100 Jaguar reg NW100. He would come and have dinner with us when he visited. Really he should have been Knighted much earlier in his career and I am sure he should have recieved many more awards. The golden days of comedy that so many of todays TV shows could learn from.
So many fond memories of a remarkable man.

Thanks for those fond memories John. It says a lot that he was so admired by Charlie Chaplin and was a huge star in Albania, stopping traffic when being mobbed by adoring fans.