They Played The Empire


A double LP found some time ago in a charity shop in Basildon I think. The Empire was a group of variety theatres that flourished like so many others between the wars and some right up to the 50's. A motely selection of artistes included here including Sandy Powell, Tessie O'Shea, Larry Adler and Norman Wisdom. I've chosen a few who make me smile for one reason or another. Above is Borrah Minnevitch' Harmonica Rascals accompanied by the Three Ginx singing "The Music Goes Round And Round and Comes Out Here".

Borrah Minevitch, the harmonica virtuoso, American born but a frequent visitor to Britain, began his recording career as the soloist in a group called the "Dizzy Trio" in 1924. He and his Harmonia Rascals appeared at Command Perfomances at the Palladium and Coliseum in 1947 and 1949.

Cyril Fletcher born in Watford in 1913, comedian of radio and stage fame first appeared in London at the Holborn Empire in 1939. He is probably more firmilar for his "Odd Odes" and sitting in his armchair on the long running "Thats Life" on BBC TV during the 70's.

Lupino Lane actor, singer, dancer and director was born in London in 1892 and died in 1959. A comic and acrobatic dancer specializing in cockney roles, his biggest in "Me And My Girl" in 1938 and his famous rendition of "The Lambeth Walk". He was the cousin of Stanley Lupino who appeared in and directed films.

Tommy Handley was born in Liverpool and graduated from the chorus to concert party and variety. He's worked with Jack Hylton and Ronald Frankau. He later found fame in the long running and influencial radio show "ITMA" leading to films and television. He died in 1948 at the age of fifty five. 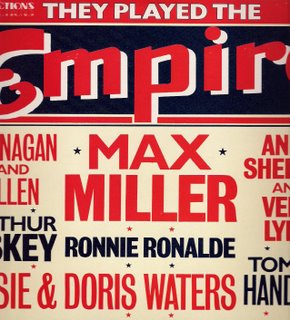 Tommy Handley - We Don't Want To Be Jiggered About

Lupino Lane - Who Are You A-Shovin' Of?


These SendSpace files are available for seven days or until exhausted.
Posted by Wastedpapiers at 12:09 AM