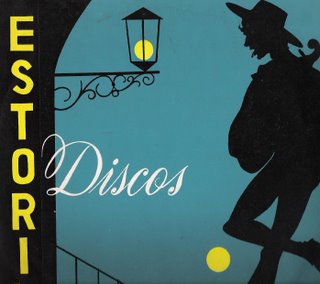 A 10" LP found in the Help The Aged shop yesterday with a bunch of others that will no doubt be featured here soon. This scratchy record (sorry) is on the Estoril label from Lisbon from the 50's I would guess by the artwork and the aged look of the sleeve etc.

"Fado is fate. The fate of a humble and sensitive people. It is the feeling of it's greatness, which is expressed by this mood of nobel ancestry, the spirit of a Christian race, the tradition of past glory and faith."

In an article in the Christian Science Monitor it says -

"The mournful roots music of Portugal was born on the narrow streets of Lisbon's working-class quarters in the mid-19th century and has been nurtured in neighborhood tabernas ever since.

Like American blues and country music (and like its distant Spanish cousin, flamenco), fado laments lost love and dashed expectations, sometimes with the sting of social critique. Even the name fado (literally "fate") speaks to its melancholy nature.

Backed by a Spanish guitar and the tinkling runs of a Portuguese guitarra, fado singers tremble with intensity. Their voices swoop up and down minor-key octaves, holding notes with anguished tremolos."


These SendSpace files are available for seven days or until exhausted.
Posted by Wastedpapiers at 11:22 AM