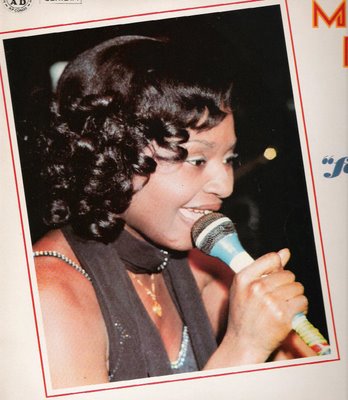 An LP on the French "Sono-Disc" label released in 1983. I think I may have bought this from a real shop - going through a phase of world music discovery back then fueled by the radio DJ Charlie Gillett who had a wonderful show on Capital Radio in London at the time. I have always had a soft spot for "soukous" and M'Bilia Bel is one of it's finest exponents.

Wikipedia has this to say about her-

"M'bilia Bel is a Congolese soukous singer, known as the Queen of Congolese rhumba. She rose to fame after being discovered by Tabu Ley Rochereau.
Born and brought up in the Democratic Republic of the Congo M'bilia Bel became successful in the mid-1980s when she recorded and toured with Tabu Ley Rochereau, and made her own solo albums. The birth of her first child prompted her to take a break from performing, however, and after a last album with Ley in 1987, she moved to Paris. There she started working with guitarist Rigo Star, and between 1989 and 1990 she went on to tour the United States, the United Kingdom, and West Africa."


These SendSpace files are available for seven days or until exhausted.
Posted by Wastedpapiers at 11:43 AM