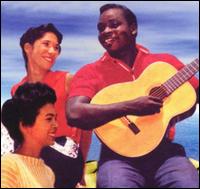 "With his ultra-sweet vocals and lyrics that speak of romance and topical politics, Mighty Sparrow (born Slinger Francisco) has risen to the upper echelon of Trinidadian calypso. Best known for his hits "Jean And Dinah" in 1956 and "Carnival Boycott" in 1957, Sparrow is an 11-time winner of the calypso monarchy and an eight-time winner of Trinidad and Tobago's Carnival Road March competition. Born to a poor working class family in Gran Roi, a small fishing village in Grenada, Sparrow moved to Trinidad at the age of one. Learning to sing in the boy's choir of St. Patrick's Catholic Church, he became the head choirboy. At the age of 14, he formed a steel band to perform at the Carnival, sparking his interest in calypso. Teaching himself to play guitar, Sparrow began to write his own songs. Winning the Carnival competition with "Jean And Dinah," he received a grand prize of 40 dollars. In protest, he wrote a scorching indictment of the Trinidadian music industry, "arnival Boycott." Despite his refusal to compete in the Carnival contests for the next three years, Sparrow became one of the Caribbean's most successful artists."

"Maria", a track from the LP "Sparrow - Calypso King" on the RCA International label released in 1970.
This compilation is a strange mixture of calypso and more pop oriented songs like Hucklebuck and The Great Pretender. he certainly sounds more comfortable with the calypso songs on here.


These SendSpace files are available for seven days or until exhausted.
Posted by Wastedpapiers at 12:03 PM