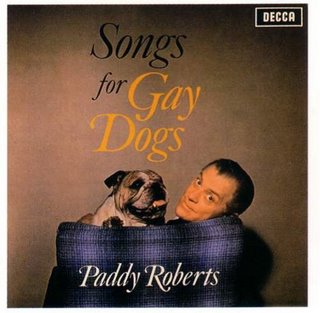 Delighted to find this at the boots sale today for 50p. One I had been searching ages for. The sleeve alone is worth 50p!
Following on from his first Lp "Songs For Grown-Ups" this one on Decca was made in 1963 and full of slightly risque songs . Probably raised a few eyebrows back then but quite harmless now ofcourse - quaint even.

"Paddy Roberts (1910 - 1975) was a popular songwriter, having previously been a lawyer and a pilot (serving with the RAF in World War II). He was born in South Africa and died in the United Kingdom. He enjoyed success with a number of songs in the 1950s and 1960s and wrote songs for several films. He released several LPs and EPs of his own material, often featuring what were, for the time, slightly risqué lyrics."

Paddy Roberts - Down In Dury Lane

Paddy Roberts - Don't Use The W.C.

Paddy Roberts - Ten In A Bed


These SendSpace files are available for seven days or until exhausted.
Posted by Wastedpapiers at 7:19 AM