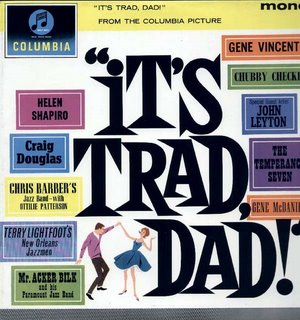 Delighted to find this rarity at the Help The Aged the other day - an LP soundtrack of a film, the first feature, by Dick Lester who went on to direct the Beatles first two films "A Hard Day's Night" and "Help". The motely selection of clean cut pop crooners and jazz bands are what mostly filled the U.K. charts before the beat boom a few months later.

"Lester's first movie was a 1962 cheapie about the resurgent traditional jazz movement, "It's Trad, Dad" (released in the United States as "Ring-a-Ding Rhythm"). With the trad-jazz boomlet fading even as the movie was nearing completion, Lester improvised by hiring Chubby Checker to do a twist number near the end. Next came "Mouse on the Moon," a sequel to the Sellers hit "The Mouse That Roared" (minus Sellers). While these epics may not have secured Lester's place in the film pantheon, they would prove significant in unforeseen ways. It was through "Mouse on the Moon" that Lester met producer Walter Shenson. And it was one of the musicians featured in "It's Trad, Dad" who played Lester some records he'd bought after hearing a group in Liverpool's Cavern Club."

The Temperence Seven - Everybody Loves My Baby

These SendSpace files are available for seven days or until exhausted.
Posted by Wastedpapiers at 1:07 PM

Gene Vincent track is a winner!
I'm glad you are making use of Help The Aged.
They've been my employers for the last 8 years.
When I'm tramping the streets, collecting the donations that people put out, my heart sinks sometimes when I see somebodys whole record collection has been left on the doorstep for me to pick up. Do you know how heavy that can be?

The Help The Aged shop is one of my favourites in town. They are always very helpful and friendly and reasonably priced unlike Oxfam who are very snooty and expensive! The Red Cross Shop is good too and always has those DVD's from the weekend papers for 20p each. So if I missed one I need i can get it there. Having time to watch it is another matter! We also have Scope, Pets Protection League, The Hospice Shop, British Heart Foundation and Madame Curies Charity shop. also the Salvation Army. A couple have closed recently which is a bit sad but more than enough to keep me on my toes!

I can't remember where I found this (it might have even been you that posted it) but here is a vid of the New Temperance Seven doing "Everybody Loves My Baby".

Thanks Howlin'. I was going to make a link to that clip ( from the film Its Trad Dad ) but it completely slipped my addled mind!

This was GREAT finding the Trad soundtrack (seen recently on TCM as "Ring-A-Ding Rhythm"). I loved this movie and the songs in it....Can you possibly PLEASE post the entire album? Thanks, dad! :-)

Sorry, I only post a couple of tracks from each LP.

Oh well....maybe someone else will have it available.