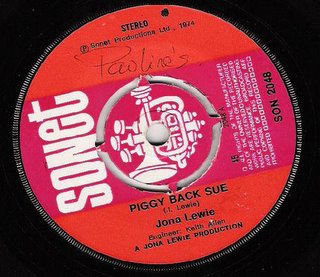 "Jona Lewie (born John Lewis, March 14, 1947) is a British singer, songwriter and multi-instrumentalist.
After being a member of the amateur group Dramatis Personae while still at school, Lewis started in the music business as a session pianist, before forming the cult pub-rock band Brett Marvin and the Thunderbolts in the late 1960s. The group were a popular live act for several years, but their only mainstream hit single was Seaside Shuffle (1972), released under the one-off nom de disque Terry Dactyl and the Dinosaurs. Borrowing heavily from Mungo Jerry's 1970 chart-topper In The Summertime, Seaside Shuffle was an unashamedly commercial disc quite at odds with the Thunderbolts' usual style, and reached number 2 in the British singles chart.

However, Lewis looked likely to remain a one-hit wonder until he was signed up by Stiff Records in 1977. Following appearances on the Stiff package tours, he finally scored a solo hit with the humorous synthpop number, You'll Always Find Me in the Kitchen at Parties (1980) - (right) which made the British top 20. Although his next single Big Shot - Momentarily failed to make any impact, by the end of the year he was back in the charts with what became his biggest (and, to date, last) hit, Stop The Cavalry."

I found this 1974 single on the Sonet label back in the 80's and it's one of my favourites from that pre-punk era when "pub rock" and roots music was being touted as the next big thing.

Jona Lewie - Papa Don't Go
Posted by Wastedpapiers at 11:38 AM

I saw Suggs recently when I was in Baker Street. He walked by, my jaw dropped and he gave me a wink and a smile.

Another fascinating find - interestingly enough of the Scandinavian Sonet label - which I always associated with modern (1970's)blues and acoustic folk guitarists.

Since you like the odd and unusual can I recommend you check out Lord Buckley - A white American from the late 50's who had neat way of telling stories in black jive talk.

Another name, although not an old one, that you should try is Sea Sick Steve and The Level Devils. As bluesy as John Lee Hookers toenails and a great listen too.

(Not the toenails but the album which is entitled. . ."Cheap")

I have a couple of Lord Buckley albums. An aquired taste I guess but interesting. I suppose all those fringe dwellers interest me to a degree , people like Lenny Bruce, Hazel Adkins, The Fugs etc. fine for the odd track but you wouldnt want to listen to a lot of it!
I read that Lewie still makes money from the xmas song he did as it gets put out every year on compilations- also he made some good property investments. Shame he's not making any records like this anymore though.

Finally got hold of a copy of Piggy Back Sue today - brilliant track, that mysteriously is missing from all Jona lewie's albums, and is VERY hard to find (took me all of 30 years, yes, really!!) Graham Fenton's Matchbox covered it very well, available on a CD.
Tim