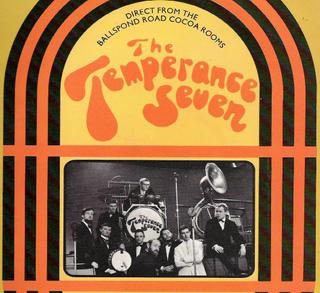 If you ever wondered what else producer George Martin was doing in the early 60's besides guiding the Beatles, he was also producing records by such novelty acts as the Temperance Seven. This record on the Music For Pleasure budget label is a compilation of songs from 1961 to 1963. They had big hits in the U.K. around this time with "Pasadena" and "You're Driving Me Crazy" featuring their affectionate tribute to those dance bands of the twenties and thirties they modeled themselves on. They were the forerunners of such novelty acts that were to follow like the Bonzo Dog Band and Bob Kerr's Whoopee Band.
The original band broke up in the late 60's but a new personel, sometimes augumented by past members are still active to this day.

These You Send It files are available for seven days or until exhausted.
Posted by Wastedpapiers at 6:59 AM

I have no idea why but this form of vaudeville type music has an enormous appeal to me and we seemed to get a spate of it during the sixties with acts like The New Vaudeville Band, The Bonzos and even The Beatles getting in on the act.
Sad to admit but I remember these chaps.

I remember them too. They looked the part and stood out like sore thumbs in the pop charts back then which was at that awful time just before the Beatles and the Stones etc. came along when the "hit parade" ( quaint phrase!) was full of people like Bobby Vee, Adam Faith, Cliff Richard, Russ Conway etc.
I suppose they appeal to the vaudevillian in all of us and its easy to see links between Ray Davies, Viv Stanshall, Ian Dury etc. and that music hall heritage and back even further.
"I Was Kaiser Bill"s Batman" by Whistling Jack SMith. Remember that one?

Whistling Jack Smith? Yep, of course I do. tried singing the song but cannot remember the tune at all!

Any chance of a repost? I'm a huge fan of the Bonzo boys and was hoping to sample this simular band.

Unlikely marvin, but maybe some different tracks by them soon. Keep watching the blog.