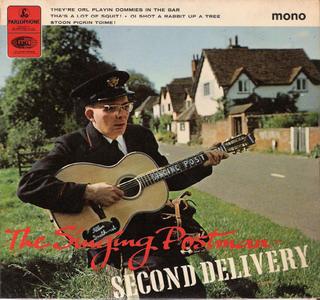 The Singing Postman - Tha's A Lot Of Squit

These You Send It files are available for seven days or until exhausted.
Posted by Wastedpapiers at 11:47 PM

"Molly McKindley, she smokes like chimney but she's my little nicotine gal"

I look forward to the Richard Thompson. I saw him play live once and the Pogues were the support band! What a shambles that was!

he is an incredible individual though isn't he and that album that he and his then wife made (can't remeber the name of it) was exceptional.

i like the pogues but shane mcgowan is a bit of wreck.

I think the album you are thinking of CJ is called "I Wanna SeeThe Bright Lights Tonight"? with his then wife Linda.
Thanks Jan. Glad you are enjoying these. I don't suppose The Singing Postman means much in Holland?!

could some nice person upload the files to yousendit again, please

P.S. tip - if you post the link that YOU receive from YousendIt it doesn't expire through number of downloads, only time ;)

Thanks for the tip ccatz. I will certainly upload them again for you if I can find them!

O.K. It didnt take that long. Here they are again for another week.

Hi there... Any chance you could upload these files again please??