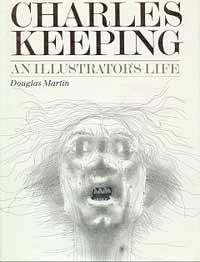 "Charles Keeping was born and grew up in Lambeth, London, in a terraced house that housed three generations. He lived in an inner city environment of street markets and working horses that would inform his work his entire life. Charles and his elder sister, Grace, drew and made up stories from an early age, on surplus newsstand placards brought home by their father, Charles Keeping senior, who distributed newspapers to shops and newsstands in the area and boxed under the name Charlie Clarke.
Young Charles was interested in little but drawing and horses, and did poorly at school. He left at 14. The Second World War broke out the following year, and when he turned 18 in 1942 he was called up and joined the Royal Navy as a wireless operator. He returned to civvy street in 1946 with a profound depression and a belief that a head wound he had sustained had disfigured him on the inside as well as (temporarily) on the outside, and would cause him to turn evil like Dr Jeckyll becoming Mr Hyde. He received treatment, was institutionalised for a time, and made a full recovery, but perhaps his sympathetic visual treatments of Frankenstein's monster and Grendel, the monster from Beowulf, owe something to this period of his life.
He applied for a grant to study art at Regent Street Polytechnic, but for several years was turned down, so he read meters for a gas company during the day and took life drawing classes in the evening. He also worked as a life model, and on one such occasion in 1949 his demonstration of the functions of the muscles of the back attracted the eye of a student called Renate Meyer, who went on to marry him in 1952."

Charles went on to become a renowned and much sought after book illustrator. One of his pet projects was a lavishly illustrated book called Cockney Ding Dong about the songs he had heard as a child. A record was released to coincide with the book and Charles and some of his family are heard singing on it.

Charles Keeping - They're Moving Father's Grave/ I Speak The Truth

These Rapid Share files are always accessible. Scroll down page and click on FREE. Wait at bottom of page for your file to appear. (About 20 seconds)
Posted by Wastedpapiers at 12:10 AM

Wow, that would make a great movie.

His cover art is amazing.

Fabulous.
Where on earth do you dig up all this extraordinary and rivetting stuff from?
I will have to look out for that book.

Thanks cate. He had an amazing life. I've added a link now just above the files so you can read more about this amazing bloke and visit a gallery of his work that his wife put together. Her knitted apples are pretty special too!

I am dicovering stuff all the time CJ and it was my old mate Jim Benson who alerted me to all this great cockney music. Its not all Chas and Dave and Mike Reid!

Fascinating! I tried to listen to the music, but darn, not able to again. You changed the format?

Yes, sorry Angelica. The new files apparently last forever as long as they are downloaded every so often it says. It looks tricky but all you do is scroll down the page and click on the FREE button and then wait at the bottom of the page until the file appears. This can range from 30 to 10 seconds depending on traffic I suppose. Then you click on the file as you normally would.