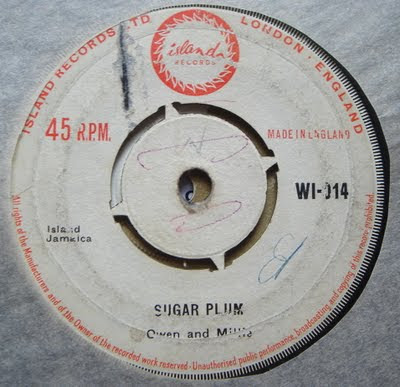 More old ska from the 60's on the Island label. Owen Gray on the "A" side and Owen teams up with Millie Small , who had a big hit with My Boy Lollipop around the same time, on the "B" side.

"Gray won his first talent contest at the age of nine, and by the age of twelve he was already appearing in public, playing drums, guitar, and keyboards. He attended the Alpha Boys School and turned professional aged 19. Gray was a dynamic performer on stage, who could be gritty or suave as the song dictated.He was the first singer (of many) to praise a sound system on record, with his "On the Beach" celebrating Clement Dodd's Sir Coxsone Downbeat system in 1959, one of the first releases on Dodd's Studio One label. He was one of the first artists to be produced by Chris Blackwell, in 1960, and his "Patricia" single was the first record ever released by Island Records. His first single, "Please Let Me Go", reached the top of the charts in Jamaica, and featured a guitar solo from Ernest Ranglin (Ranglin's first recording session). The single also sold well in the United Kingdom, as did subsequent releases, prompting Gray to emigrate there in 1962. He toured Europe in 1964, and by 1966 he was well known as a soul singer as well as for his ska songs. In the rocksteady era, he recorded for producer Sir Clancy Collins. His popularity continued throughout the 1960s, working with producers such as Clement Dodd, Prince Buster, Arthur "Duke" Reid, Leslie Kong, and Clancy Eccles, including work as a duo with Millie Small, with songs ranging from ska to ballads. He continued to record regularly, having a big hit in 1968 with "Cupid". His 1970 track "Apollo 12" found favour with the early skinheads, and in 1972 he returned to Island Records, recording reggae versions of The Rolling Stones' "Tumblin' Dice" and John Lennon's "Jealous Guy", although they met with little success. During this period, he regularly had releases on Pama and sister label, Camel Records, and one single on Hot Lead Records. He had greater success in Jamaica, however, with "Hail the Man", a tribute to Emperor Haile Selassie, which was popular with the increasing Rastafari following. Gray spent a short time living in New Orleans before returning to Jamaica where he turned his hand to roots reggae, working with producer Bunny Lee, and achieving considerable success. In the 1980s relocated to Miami. He has continued to release new material regularly, often concentrating on ballads and Gospel music."

Owen Gray - Jezebel
Posted by Wastedpapiers at 9:36 AM