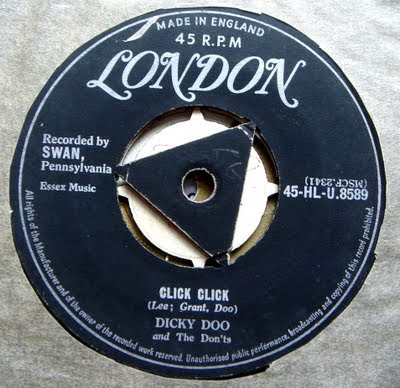 A pop single this time from the archive - on the London label from late 50's. Catchy little number I vaguely remember being played on the radio at the time.

"The story of Dicky Doo and the Don'ts revolves around Gerry Granahan (born 17 June 1939, Pittston, Pennsylvania). Having moved to New York in 1955, he earned his keep working demo sessions for music publishers. Herb Abramson of Atco Records signed him as a singer and Gerry had two singles released on that label, one as Jerry Grant and one under his own name. In late 1957 he befriended Dave Aldred, the drummer of Buddy Knox and the Rhythm Orchids, and together they wrote a song called "Click Clack". They made a demo at the Bell Studio, with Granahan's voice multi-tracked, and took it to Dick Clark, host of the nation's most popular TV pop show, American Bandstand. Notwithstanding a blatant conflict of interests, Clark and his producer, Tony Mamarella, were just about to launch their own record label, Swan Records. Clark made "Click Clack" Swan's first release. Granahan could not use his own name, as he was signed to Atco. Clark had a new-born son which he jokingly called Dicky Doo and Tony Mamarella suggested Dicky Doo and the Don'ts as the group's name. When "Click Clack" charted (peaking at # 28), Aldred and Granahan formed a touring group with Ray Gangi (guitar), Al Ways (sax) and Harvey Davis (bass). Aldred even legally changed his name to Richard A. Doo. The group had four more chart entries in 1958-59 with Swan singles. Then Granahan dropped out to concentrate on a new group, the Fireflies (hit : "You Were Mine", # 21, 1959) and on producing acts for his newly formed Caprice label. In between, Granahan also scored a hit under his own name, "No Chemise Please", which went to # 23 in mid-1958 (Sunbeam 102)."

Dickie Doo - Did You Cry
Posted by Wastedpapiers at 6:06 AM