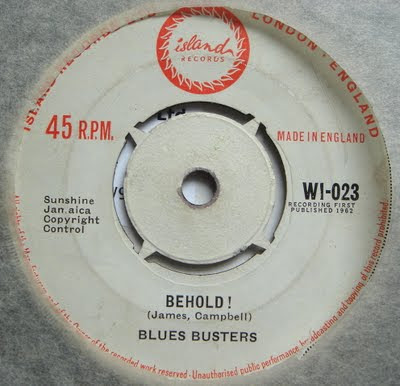 More ska from 1962 on the Island label. Some southern soul influenced ska from the Blues Busters.

"The Blues Busters were a Jamaican vocal duo formed in 1960, comprising Philip James and Lloyd Campbell. The Blues Busters were the most consistently popular Jamaican male duo of the early 1960s, and were part of the Jamaican party that performed at the 1964 New York World's Fair. They initially worked in cabaret shows to tourists in Kingston and Jamaica's north coast, but got their big break when they were asked to accompany Sam Cooke on his tour of the island. Taking inspiration from Cooke, on returning to the cabaret circuit they emulated the soulful harmonies of his performances and recorded a number of soul and reggae cover versions, having minor hits with "Thinking" and "Privilege". They continued until the mid-1980s, by which time they had released several albums, one of which was a tribute to Cooke."

Blues Busters - Behold!
Posted by Wastedpapiers at 3:24 AM