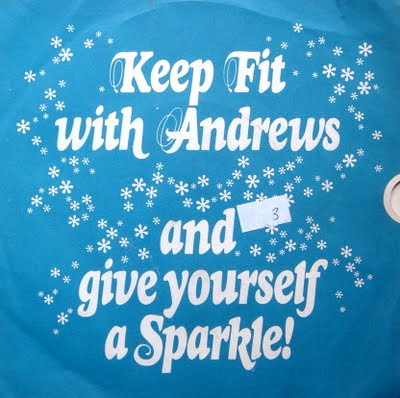 A promotional record (EP) on the Lyn label from the 60's I imagine with popular disc jockey Emperor Rosko telling us how to exercise with music and Andrews Liver Salts.

"Mike Pasternak, better known by his stage name of Emperor Rosko (born December 26, 1942) is a well known pop radio presenter, not to be confused with American radio presenter William (Rosko) Mercer.
Born Michael Joseph Pasternak, he is the son of Hollywood film producer Joe Pasternak. He was influenced in his career choice by KYA Radio Los Angeles DJs Lord Tim Hudson and Wolfman Jack. Rosko's opportunity to broadcast came whilst in the US Navy where he presented a show on an aircraft carrier. He then went to Europe and hosted sponsored programmes in France and Belgium.
He joined Radio Caroline, a pirate radio station broadcasting from a ship off the coast of England, in 1964. There, his pacey American style soon made Rosko one of the station's best loved DJs. He then was heard on French language stations Radio Monte Carlo and Radio Luxembourg.
Rosko compered the Stax/Volt Tour of Europe in 1967 and can be heard introducing Booker T. & the M.G.'s, The Mar-Keys, Carla Thomas, Eddie Floyd, Sam & Dave, and Otis Redding on the two-album set The Stax/Volt Tour in London, recorded at the Finsbury Park Astoria (later the Rainbow Theatre on 17 March 1967.
It is Rosko who is heard introducing soul singer Otis Redding, as well as encouraging the crowd to chant and spell his name on Redding's album Live in Europe, recorded on March 17 and March 21, 1967. As a disc jockey with Radio 1 at its launch in September 1967, Rosko initially recorded shows in France for the Midday Spin programme. On his first Midday Spin show, Rosko introduced himself with "I am the Emperor, the geeter with the heater, your leader, your groovy host from the West coast, here to clear up your skin and mess up your mind. It'll make you feel good all over." He highlighted the new Motown, reggae, and rock music."


Keep Fit With Andrews - Side One
Posted by Wastedpapiers at 7:59 AM