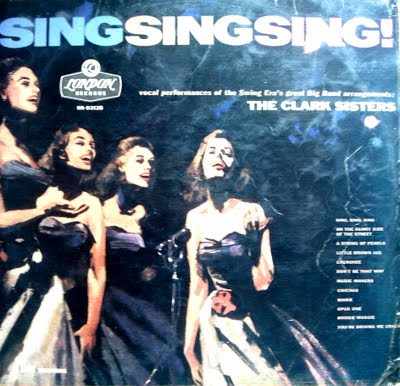 I was hoping this would be more like The Andrews Sisters but sadly a bit more like The Mike Sammes Singers with a big band backing. A bit too sickly for my taste.

"The Sentimentalists, also known as the "Clark Sisters" (and also as the "Original" Clark Sisters; so-called to distinguish them from the current gospel music group of the same name), were an American close harmony singing group, consisting of sisters Mary Clark, Peggy Clark Schwartz, Ann Clark, and Jean Clark. Hailing from Grand Forks, North Dakota, they were a mere seventeen to twenty-three years of age, when they signed with the Tommy Dorsey Band, in 1944, to replace the popular Pied Pipers, after the Pipers had quit Dorsey's band to go out on their own.

Although they never achieved the fame and fortune of some of their contemporaries (like the Andrews Sisters and the McGuire Sisters), the Clark Sisters' recordings are today actually more highly-prized by jazz aficionados, for their unique vocal stylings, in which they often emulate (and in fact sing the actual charts for) instrumental sections. By contrast, neither the Andrews Sisters, nor the McGuire Sisters are today considered to be part of the jazz lexicon, despite their chart success."

The Clark Sisters - Side One
Posted by Wastedpapiers at 5:51 AM

Thanks for the tracks. Would you please upload the remaing tracks? That LP you have is really hard to find.