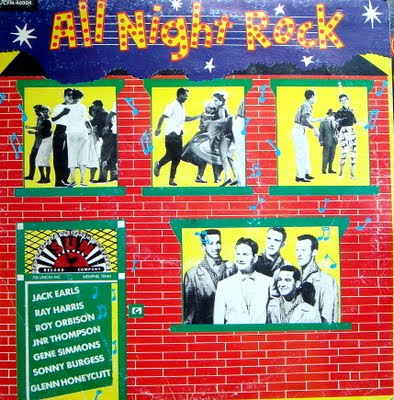 A 10 inch LP I found at the market today. Its a bit scratchy but worth a listen I think. Contains a few old Sun rockabilly sides including Roy Orbison, Sonny Burgess and Gene Simmons. All recorded at the Sun Studios in Memphis in 1956. This comp. was put together on the Charley records label in London 1982.

"Simmons was born Gene Simmons in Tupelo, Mississippi, and began his recording career with Sun Records in 1958, while performing as an opening act for labelmate Elvis Presley. However, the label released only one (non-charting) single from his recording sessions. His first and only Top 40 hit was "Haunted House," a cover of a 1958 recording by Johnny Fuller which peaked at #11 on the Billboard Hot 100 in 1964; the song represented one of Hi Records' early successes. The track was later covered by the Compton Brothers, Jerry Lee Lewis and Hasil Adkins. His last work was "Indian Outlaw," which he co-wrote, and was a hit for Country music artist Tim McGraw in 1994.

Simmons' Hi Records recordings were released as an anthology, Haunted House: The Complete Jumpin' Gene Simmons on Hi Records, in June 2001. Sun Records followed suit in December 2006 with the 33-song collection Drinkin' Wine: The Sun Years, Plus. He had recorded several albums with both labels but they were never released."


All Night Rock - Side One
Posted by Wastedpapiers at 6:05 AM

This is what a like! You say it's not in good shape but worth listening to it. I'm a Wedding DJ/Oldies DJ that still spins vinyl at weddings and I earn a lot of respect and thanks for couples and weddingguests. And they never complain even when you hear a scratch from time to time. It's the fact it's still vinyl and you hear music, that most people don't hear on radio anymore. I love Sun records, been there many times. Love your blog and I will come back here more often to check out your strange and worthy found records! Love it! Thanks for sharing it!

Thanks for the comment Hochzeits - always good to get feedback.