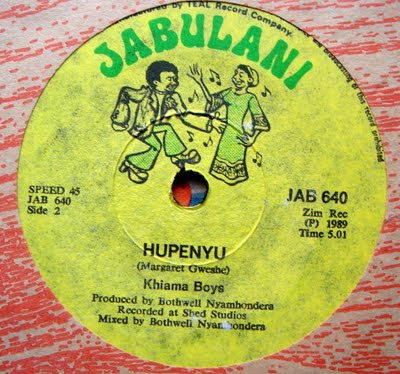 Single on the Jabulani label from 1989. One of a batch that DJ Charlie Gillett sent to me around that time after one of his trips to Africa. I often used to send him mix tapes of odd records I found on my travels and he was kind enough to send things back from time to time. Similar sound to the Bhundu Boys and others who were making inroads into the UK "world music" scene during the late 80's and early 90's.

Khiama Boys started in the same manner as many other African bands, as a cover band. Formed in 1988, the group performed covers of local and international songs, including Bob Marley. Khiama Boys eventually took to writing their own music, a hybrid of Zimbabwean and South African influences that sounds similar to, in my opnion, a mix of Leonard Dembo and the Bhundu Boys. The group has been active ever since, producing a steady stream of hits and establishing themselves as a froce within the Zimbabwean music scene.

The Khiama Boys, however, have been plagued by a revolving door of band members. Royalty discrepancies forced guitarists System Tazvida and Cephas Karushanga out of the group in 1989 to form their own band, Mabhauwa Express. Tazvida would later join the Sungura Boys, and found the Chezeseza Challengers. Ephraim Joe would depart for the Sungura Boys and an eventual solo career. The late 90s saw guitarist Alick Macheso leave the group to form his own band, current chart toppers Orchestra Mberikwazvo. Today Khiama Boys are fronted by vocalist Nicholas Zacharia, who led their 2001 album, Dzidziso, to sales of over 60 000 copies."