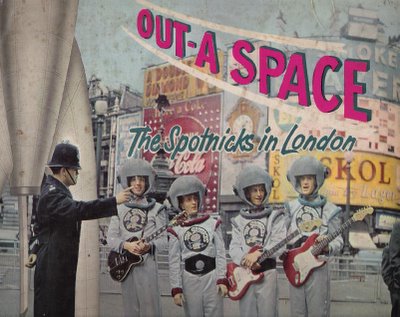 "The Spotnicks was formed in GÃ¶teborg, Sweden, in 1957, by guitarist and undisputed bandleader Bo Winberg. The other members were guitarist and singer Bob Lander, drummer Ove Johansson, and bassist BjÃ¶rn Thein, several of whom had already played together in local rock & roll bands like the Blue Caps, Rock Teddy, and the Rebels. The first year, they performed under the name the Frazers, but soon changed it to the Spotnicks. In 1961, they were signed by Karusell and released their first singles containing mostly instrumental covers of famous songs. The selection of songs was as varied as the performance was homogenous, including titles like "Hava Nagila" and "Johnny Guitar." Later the same year, the Spotnicks toured Germany, France, and Spain and in 1962, they released the debut album The Spotnicks in London, recorded on their first trip to England. Featured on this tour were the space suits that the band would wear on-stage until 1969. "Hava Nagila" became a hit in England in 1963 and the same year, Johansson left and was replaced by Derek Skinner. The rest of the '60s meant increasing success in Europe, the U.S., and Japan, and the band even managed to compete with themselves on the Japanese charts when the Spotnicks' song "Karelia" took the first position from the Feenades' "Ajomies." The song was the same, just recorded under different titles. The Feendes were a Finland-based side project to the Spotnicks, built on Winberg and Peter Winsnes, who had joined the Spotnicks in 1965. Winberg also released less successful recordings under the name the Shy Ones. Compared to the following decades, the '60s were a relative stable period for the group when it came to the lineup. Some new members were recruited though, like drummer Jimmie Nicol, bassist Magnus Hellsberg, and drummer Tommy Tausis, who had earlier played with Tages

In 1969, the Spotnicks disbanded, but Winberg continued to record using the name until the group reunited in 1972 on request by a Japanese record company. The same year, "If You Could Read My Mind" from the album Something Like Country became a big hit in Germany. The Spotnicks would keep their popularity there for a long time, even as it faded elsewhere. Only the Japanese audience proved more faithful and accordingly, the Spotnicks located most of their tours during the '70s to these countries. After the release of Something Like Country in 1972, by many fans seen as the Spotnicks' best album, they had practically ended being a band, consisting mainly of Winberg and various session musicians."

I must apologize for the terrible condition of this record. Found at Brick Lane flea market many years ago. The sleeve photo is a classic and the music is pretty good too despite the crackles and jumps!

Thanks for this one !
If you don`t know their rarities yet, you can dl them here:

A lot of beatstuff, especially the songs with vocals.
Cheers,
Joey