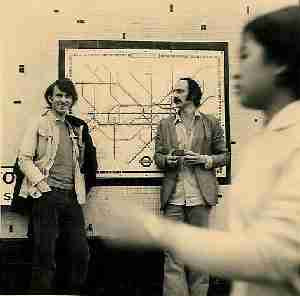 Charlie Gillett on the left on this photo from the Oval Records website back in the 70's when this Honky Tonk radio show was broadcast, probably in November but not absolutely sure.
Guests are the anarchic Dr. Hook whose entertaining banter enlivens a great 90 minutes with songs from Dr. Hook's new album at the time and various records that Charlie thought they might enjoy. He manages to control the proceedings pretty well considering!
Thanks go to John Mister for supplying this tape from his archive.

*Dr. Hook and the Medicine Show got their start around 1968 playing the bar circuit in and around Union City, New Jersey. Originally, they were comprised of five people, most notably Ray Sawyer on vocals and guitar and Dennis Locorriere on lead and vocals. Sawyer's trademarks were the cowboy hat and the eyepatch, the result of an automobile accident in 1967. Locorriere was bearded. Both guys were the center of the group because of their crazy antics onstage. Their energy, strange sense of humor (they once appeared as their own opening act!) alternating with the ability to pull off an emotional ballad made Dr. Hook one of the most successful bands in the 1970s, scoring 35 gold or platinum hits."