Butch Cage and Willie B. Thomas 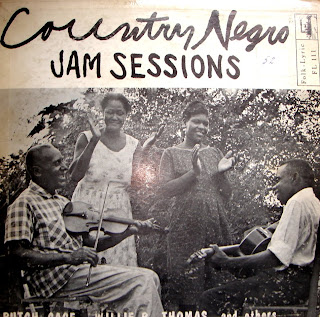 An old scratchy LP I've had a for many years. I can't remember how I came by it. Its on the Folk Lyric label and recordings done in the field by Harry Oster in 1959/60.
Lovely down home guitar and fiddle playing and one can imagine them on the porch of an old shack with chickens and dogs running around. One can clearly hear African roots here especially in tunes like Foxhunt.

"The songs on the album Country Negro Jam Session were recorded in Southwestern Louisiana between 1959 and 1962, some in Angola Prison, others at house parties around Baton Rouge (the remaining 5 titles on CD reissue were recorded by Chris Strachwitz and Paul Oliver in 1960). In it’s earliest incarnation, the first 14 tracks of the 25 title program were released on Dr. Oster’s now-defunct Folk Lyric label, and then re-released on Arhoolie intact after Chris Strachwitz purchased the Folk Lyric catalog. Oster did a series of field recordings, informal jams with a group of obscure blues men and women, only one of whom, Robert Pete Williams, won fame. Otis Webster was recorded extensively by Oster in 1959 and 1960 all in Angola Prison. Many of the sides remain unissued. Willie B. Thomas (vocal & guitar) and James ‘Butch’ Cage (vocal & fiddle) make up a good part of Country Negro Jam Session. The duo’s string band music is reminiscent of Peg Leg Howell and his gang and the two play not only blues but also pop, and religious music. They also back singer/guitarist Clarence Edwards on several numbers. Butch Cage was born in 1894 near Meadville, MS, and whom Oster describes aptly in the liner notes as “a great representative of the now virtually extinct 19th century black fiddle tradition”, while Willie B. Thomas was born near Lobdell, LA in 1912."

Butch Cage/Willie B. Thomas - Who Broke The Lock

Butch Cage/Willie B. Thomes - Foxhunt
Posted by Wastedpapiers at 12:15 AM