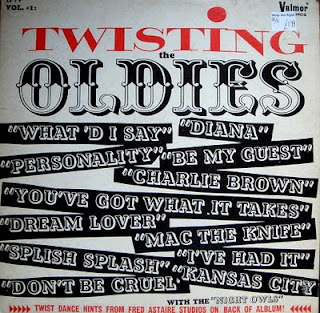 An LP on the small Valmor label that put this out in the early 60's when the Twist dance craze was at it's height. All instrumentals of old rockers like Dream Lover, Splish Splash and Kansas City etc.

"The thrill of the late 1950s and the phenomenon of the early 1960s --the dance anyone can do-- was the twist. Nearly the hula-hoop movement without the hoop, the twist paved the way for the frug, watusi, monkey, pony, swim, snake, hully gully, etc., and even the limbo, mento, ska, and a new dance called the "regay" in some liners. Yes, these were the last days of teenagers and the older dancing generation sharing phonograph and stage.

The basics were Chubby Checker with the hit song (and endless variations), the Isley's "Twist and Shout," and Joey Dee & the Starlighters creating a scene at New York's Peppermint Lounge. All this healthy activity led to attempts at the twist by big bands, high-society orchestras, Latin artists, and of course rock and soul bands. (The list below excludes most of the obvious twist sources, such as the Champs, Coasters, Joe Houston, Louie Prima, Huey Smith, etc.)

The twist made its most interesting impact abroad, on French pop, Tahitian, and presumably even Indian and Hawaiian artists. It is a goofy legacy, but after all, it is where rock and social dancing parted company."

Valmor discography and brief history of the label HERE.


Night Owls - Be My Guest

Night Owls - I've Had It
Posted by Wastedpapiers at 5:41 AM

Thanks CJ . yes the cover is the most attractive part really!

Good find! Now I know why we can't find these here -- they're all in thrift shops in Europe.
These tracks sound terrific compared to the usual junk that got rushed out during the twist craze. Is the rest of the album about the same?

Yep , pretty much KL. I have a couple of other cheap Twist LP's somewhere I'll have to root out one of these days.