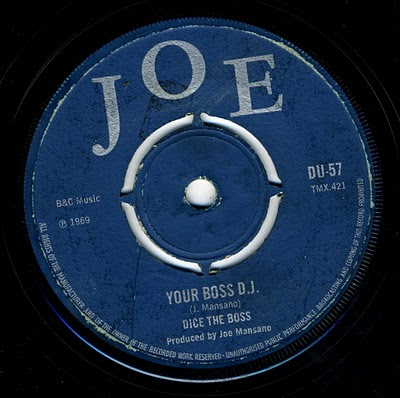 Some old ska singles now that I have put up from time to time. I've always had a soft spot for this kind of thing. I have a huge box full of Blue Beat and Ska beat singles from the 60's and will try and feature a few from time to time.

"Joe Mansano was born in Trinidad and Tobago, moved to the UK in 1963 to study accounts, became a record producer and returned in 1980 to his country.

In the UK reggae world he is best known for his production work for Trojan Records, the company that offered him also a record label, called Joe.

With Rico Rodriguez on trombone he produced an LP Brixton Cat in 1969.

Over the re-release of the LP Mansano was not informed until he came to England in 2002. Negociating with Sanctuary Records they agreed over royalties and the release of a compilation of his work on 7" sides that were long out of print.

Joe The Boss was released in November 2006 and containes several tracks with Rico on trombone who were not available on CD until now. "
Posted by Wastedpapiers at 2:21 PM

Great label art. I love how colorful and interesting the old labels were. If you want to sell this or any other record please let me know. I collect old 45's mostly. Cheers and keep up the cool blog. Jason www.lawless-street.com

Thanks for dropping by Jason. Glad you like these old ska 45's.